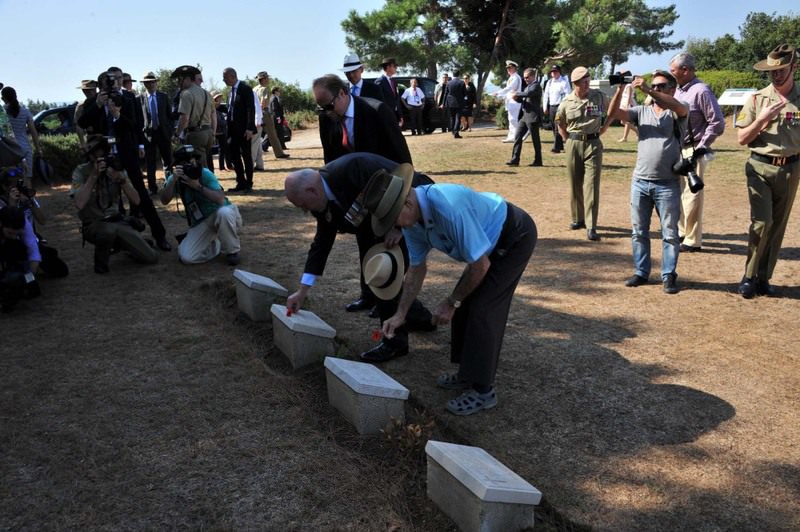 Australian Governor-General Sir Peter Cosgrove and others left flowers on the graves of Ottoman troops killed in the Battle of Gallipoli before the commemoration event.
by Daily Sabah with AA Aug 07, 2015 12:00 am

For the first time Turkey hosted a second event for hundreds of people from Australia and New Zealand, including Australian Governor-General Sir Peter Cosgrove, who on Thursday commemorated the centenary of two battles during the World War I campaign for Gallipoli, where ANZAC forces fought the Ottoman army

Some 5,000 people from Australia and New Zealand attended commemoration events on Thursday in the northwestern province of Çanakkale where Australian and New Zealand Army Corps (ANZAC) forces fought the Ottoman army 100 years ago in the World War I allied campaign of Gallipoli. The events are a first of their kind, as Turkey only hosts one event in April for Australians and New Zealanders. Thursday's ceremony was a special occasion to give an opportunity to those who were not able to attend April's commemoration for the ANZAC soldiers who died fighting the Ottoman troops, and included descendants of the fallen soldiers.

Australian Governor-General Sir Peter Cosgrove and Turkish officials were among the participants at the ceremony in Yalnızçam (Lone Pine), where more than 2,200 Australian soldiers were killed during an offensive to capture the eponymous site from Ottoman forces on Aug. 6, 1915. 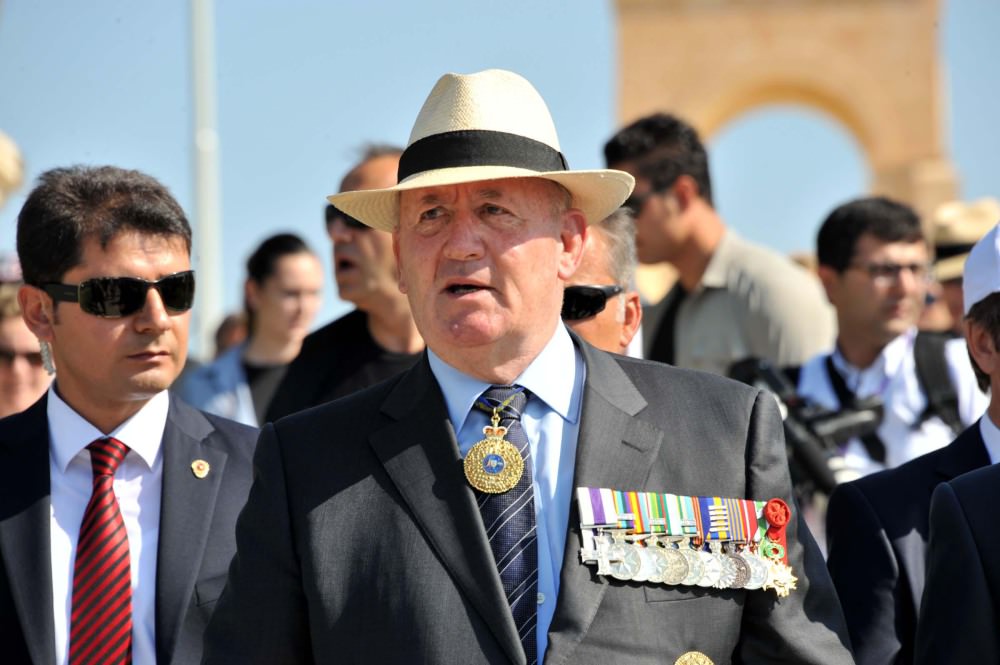 Cosgrove and Çanakkale Governor Ahmet Çınar placed wreaths at a cemetery where troops from the Ottoman army's 57th Infantry Regiment were buried as a gesture of friendship between Turkey and Australia, which were bonded over their losses years after the war.

Cosgrove said at the ceremony that, as an Australian, he was very proud and honored to be at the Turkish cemetery "where very brave men defending Turkish soil fought and died."

"The 57th Regiment is one of the most famous regiments of modern Turkey," he said, adding that it "represented a path for the Turkish resistance at Gallipoli, which turned the battle for Turkey. The 57th Regiment is no longer on the Turkish order of battle but it lives on, and while people visit this memorial, the regiment will never die," he said.

Australian visitors then proceeded to visit the graves of ANZAC troops buried at Lone Pine Cemetery.

The commemoration events will continue on Friday and over the weekend. Another event is scheduled at Conk Bayırı (Chunuk Bair), the site of a fierce battle between ANZAC troops and the Ottomans that resulted in an Ottoman victory, on Saturday. New Zealander Governor-General Sir Jerry Mateparae, who arrived in Turkey earlier this week, is expected to attend the commemoration event.

More than 43,000 Australians and New Zealanders applied to attend this year's main commemoration event in April but many were unable, as the site cannot accommodate more than 10,000 people.

The Ottoman Empire, which sided with Germany and Austria-Hungary during World War I, faced a major push from Allied forces seeking to control the Çanakkale (Dardanelles) Strait, the gateway to Istanbul - the then-capital of the Ottoman Empire - and the Black Sea from the Aegean and Mediterranean seas. In February 1915, the British and French navies launched a massive attack on the straits, and on March 18, 1915, the primary assault began. When battleships failed to seize the strait, the Allies dispatched troops that landed on the Gallipoli Peninsula in April 1915. This campaign failed as well, with heavy casualties sustained on both sides. The Allies' total casualties amounted to 187,000 soldiers, while Ottoman forces lost about 211,000 troops in the battle, according to Turkish sources, though the exact number of casualties is still unknown.

The campaign, which is considered one of the greatest Ottoman victories during the war, formed the basis for the Turkish War of Independence, whereas it is often considered as marking the birth of national consciousness in Australia and New Zealand.
RELATED TOPICS