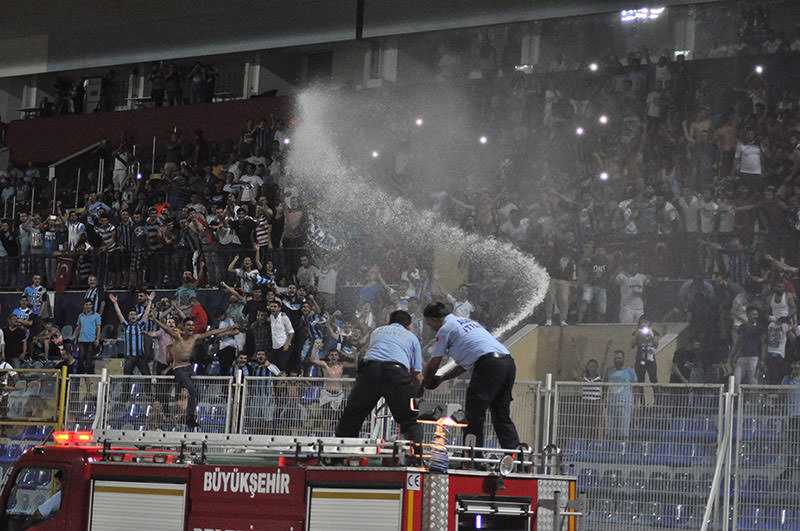 | u0130HA photo
by Daily Sabah Aug 09, 2015 12:00 am
The Adana fire department is not only extinguishing the fire, but also coming to the rescue of those sweating bucks in hot summer days. One of those cases was when the fire department for Turkey's southern province of Adana sprayed water on football fans on Saturday evening when the thermometer hit 30 degrees Celsius with humidity setting at 80 percent.

The match between Adana Demirspor and Kayserispor started late at 8.30 p.m. local time in hopes the weather would cool down a bit, but humidity kicked up keeping the temperature well above 30 degrees Celsius.

The constant cheering for 90 minutes of the match did not help the fans with the over-bearing weather, at which point the province's fire department, which is usually at the stadium in case of a fire, came in handy.

The fans started to call out to the fire personnel chanting, "Refresh us", after which the water hoses were turned to the fans. After the fire department's 'gesture', the fans chanted pro-fire department slogans.

A heat wave hailing from North Africa is engulfing Turkey and is particularly impacting southern cities known for their warm climate in the summer.

Adana, a southern city notorious for its unbearable heat, is expected to experience an unprecedented heat wave in August, with temperatures rising to 40-45 degrees Celsius during the day, compared to 36 C, the highest temperature recorded for the city for the past couple of decades.
Last Update: Aug 09, 2015 5:42 pm
RELATED TOPICS