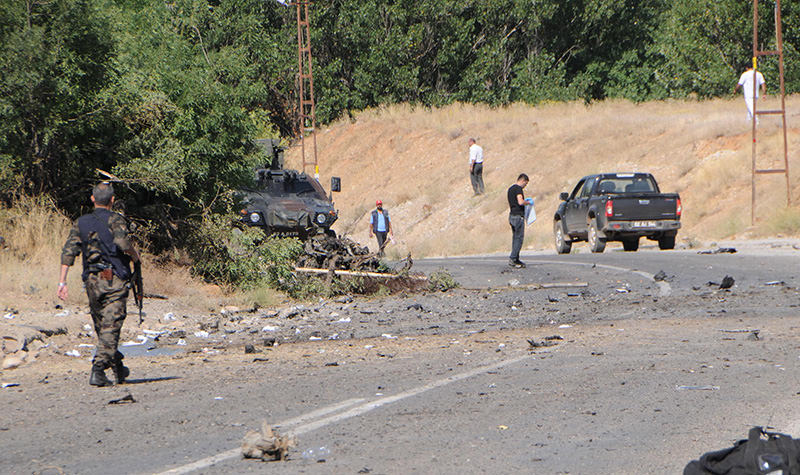 One police officer injured in an attack with a bomb-laden vehicle in eastern Tunceli province (AA photo)
by Daily Sabah with AA Aug 12, 2015 12:00 am
At least one police officer was injured in a rocket attack undertaken by PKK terrorists on a government office in Turkey's southeastern province of Mardin late Tuesday, official sources said.

One PKK member was also killed in clashes with police.

The wounded special-operations officer was taken to Diyarbakir Hospital and is in a stable condition, Mardin Governor Ömer Faruk Koçak told Anadolu Agency.

Separately, one police officer was injured in an attack with a bomb-laden vehicle in eastern Tunceli province on early Wednesday.

PKK is believed to have carried out the attack against the vehicle carrying special operations forces and detonated the bomb as the vehicle was passing through Ovacık district.

The wounded police officer was taken to Ovacık Hospital, and it was reported that his condition is critical.

In another attack of PKK terrorists, one sergeant was killed, four soldiers and one village guard injured in Turkey's southeastern province of Diyarbakır following the group's strike against a gendarme station. Two PKK terrorists were also killed during the clashes with the Turkish security forces.

Meanwhile, İbrahim Turan, a 44-year-old civilian who was shot two weeks ago with a long-barreled weapon fired from a car while sitting in front of a tea house in southeastern Diyarbakir province, died early on Wednesday. The attack is also believed to have been undertaken by the PKK.