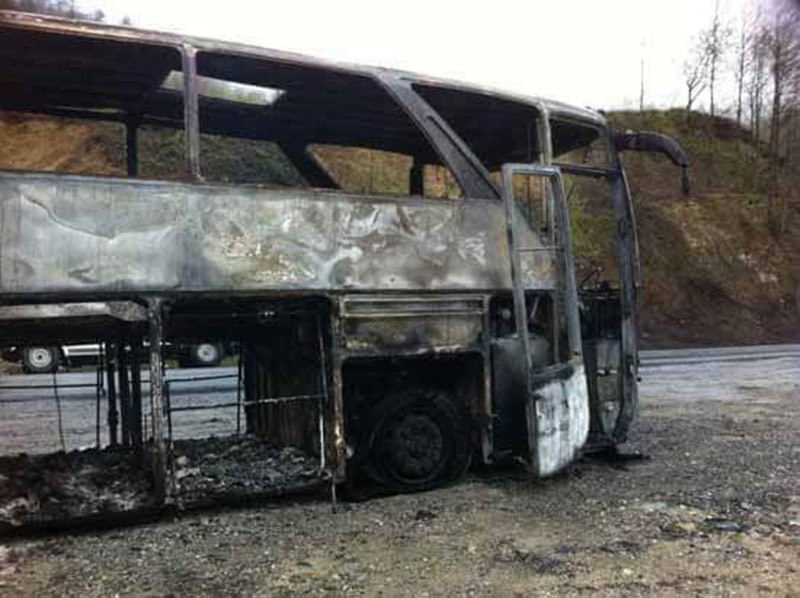 | IHA Photo
by Daily Sabah with AA Aug 17, 2015 12:00 am
A civilian died on Monday following a PKK terrorist attack on a bus in Turkey's eastern province of Erzurum.

The incident occurred at around 8:45 a.m. on Monday morning on highway connecting the Erzurum province with Ardahan's Göle district, reported agencies. The PKK terrorists reportedly stopped the civilian bus and set it on fire after demanding that passengers to step off.

Meanwhile, PKK terrorists raked through a minibus that was passing by the road trying to avoid the conflict by fleeing the scene. A civilian on the minibus was injured by PKK fire, and although he was taken to the hospital, he could not be saved. The civilian's name was Galip Bektaş. The victim aged 43 was married with two children.

Turkish security forces closed down the road to traffic, and launched an operation in the region to track the terrorists.

In a separate incident on Monday, PKK terrorists attacked a military draft office and military housing complex in the Muradiye district of eastern Van province. No one died or was injured in the attack.

Meanwhile on Sunday evening, a group of PKK terrorists blew up a transmitting station of the country's national public broadcaster, known as TRT, in the eastern Bingöl province. The transmission systems of GSM operators in the region were also damaged in the attack.

Security sources said on Monday that six suspected PKK terrorists were killed in a clash with security forces in the eastern Muş province on Sunday.

According to the sources, the suspects were killed in an operation in the province's Varto district, where the PKK reportedly planted mines and explosives.

The operation was carried out during a curfew declared by the Muş governor between 8.30 p.m. and 5.00 a.m., local time on Sunday.

A PKK member was also captured alive, security sources said, adding that many homes and offices were also damaged in the incident.

Moreover, security forces diffused two gas cylinder bombs that were packed with 120 kilograms of explosives at different locations in the district, the sources said.

Also, security forces intercepted a suspected car at the entrance of the district and seized 15 Kalashnikov rifles, five Rocket-Propelled Grenade rounds and around 5,000 bullets on Monday.