HDP in hot water after attack on media group CEO 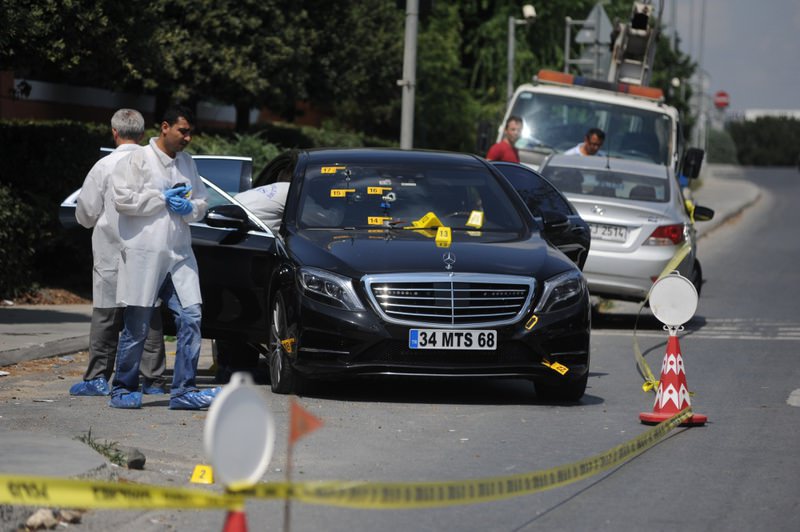 The HDP, known for its association with the PKK terrorist organization, is facing condemnation after an attack on Murat Sancak, CEO of a media group known for criticizing the HDP, soon after HDP Co-Chair Selahattin Demirtaş openly targeted one of the group's newspapers at an election rally

Some 20 rounds riddled the car and gunmen fled the scene after Sancak's bodyguard returned fire.

Some newspapers and journalists groups blame the HDP's harsh rhetoric toward the media group for the attack that came amid a new wave of terrorism the PKK launched after the June 7 general elections. Scores of military officers, police officers and several civilians were killed in two months of violence perpetrated by the PKK. The HDP is already under fire for not denouncing the attacks, and Star Media Group was among the staunch critics of the party. The HDP's co-spokesman and İzmir Deputy Ertuğrul Kürkçü said that PKK terror attacks on Turkish security forces are not "a matter of condemnation" during a live broadcast on the BBC on Aug. 6. HDP Co-chair Figen Yüksekdağ was also quoted by Turkish media for refusing to define the PKK as a terrorist organization, instead referring to it as "a national liberation movement and an organization that stands for democracy and equality."

Star Media Group pursues an editorial policy siding with counterterror operations. Sancak is the brother of Ethem Sancak, a prominent media tycoon whose newspapers also support the crackdown on the PKK, which has been designated as a terrorist organization by Turkey, the U.S. and the EU.

Speaking to reporters on Friday, President Recep Tayyip Erdoğan said the attack against Sancak was "an example of intolerance toward freedoms by those speaking about freedom of expression." "The attack shows who really sides with freedoms. If the certain political party that has the backing of the terrorist organization had really advocated freedoms, they would respect the freedom of voters in the southeast, in the east," he said, referring to threats by the PKK on the electorate in the said predominantly Kurdish regions, to not vote for parties other than the HDP.

Police are now searching for perpetrators of the attack that came days after a concealed explosive device was found in the courtyard of the media group's headquarters in Istanbul. The device, equipped with a timer, was defused in time. A group linked to the Marxist-Leninist Communist Party (MLKP) terrorist organization had claimed responsibility for the attack.

In a written statement after the assassination attempt targeting Sancak, Star Media Group said the group was recently the target of a systematic campaign "that once again culminated [in an attack]." "We would like to remind these terrorist groups that their efforts to silence Star Media are futile," the statement said. The statement also criticized "political party leaders, media companies and intellectuals linked to them who motivate terror groups."

The Media Association, a leading journalists' organization, issued a statement that said the aggressive rhetoric by Demirtaş and some other politicians contributed to an increase in the attacks against the media. The Media Association also expressed concerns regarding the state of Turkey's media "that helped create a climate of terrorism" and "acted like a mouthpiece for terrorist organizations," pointing to media outlets portraying terrorists as friendly activists. The association said in its statement that terror attacks would not force journalists to change their publication policy against terrorism.

Journalists have been victims of attacks in the past. Abdi İpekçi and Uğur Mumcu were among two high-profile journalists who were killed in 1979 and 1993, respectively, after they penned articles and books critical of terror and violence prevalent in both decades.
RELATED TOPICS