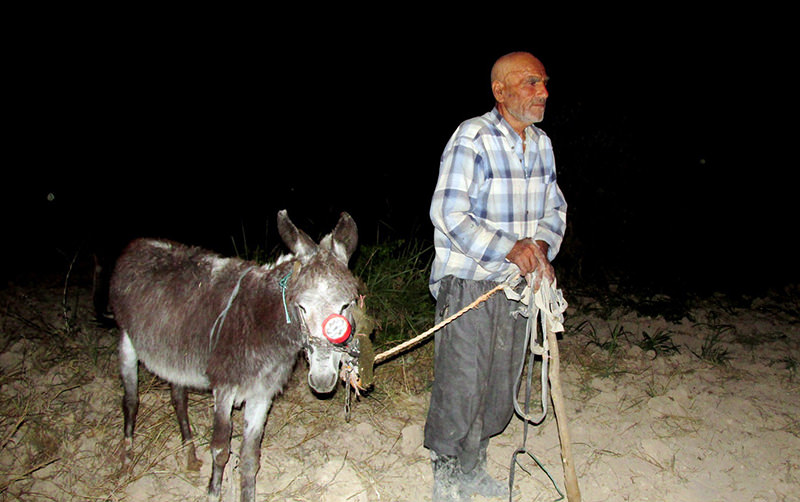 Hamo Demir with his donkey (u0130HA photo)
by Daily Sabah with IHA Aug 23, 2015 12:00 am
An elderly man in the southern city of Gaziantep came up with an ingenious solution to protect his pistachio orchard. Hamo Demir, 100, equipped his donkey with a flashlight wrapped around its neck and set it free in the orchard at night. The donkey, unaware of its new duty, is motivated to guard the orchard by grazing freely throughout the night.

Demir lives in Karkamış, a district of Gaziantep that is known throughout Turkey due to Syrian conflict that rages just a few meters away on the Syrian side of the border and for gunshots ringing on the Turkish side. However, the main concern for farmers in Gaziantep, renowned as Turkey's pistachio capital, is the theft of their produce.

Some hire guards while others protect their orchards on their own, patrolling the areas at night. Demir is a fragile old man who said he has difficulty walking. "My wife and I, we are the only two people keeping watch over 100 trees, and theft is common here," he said.

"Our pistachios were stolen once and my wife was angry. She told me how they could steal the pistachios and she was angry that I failed to protect the orchard. So, I thought putting a flashlight on the donkey and setting it loose was a good idea. I can now sleep tight with the donkey