Masked man on Greek boat suspected in attack on migrants 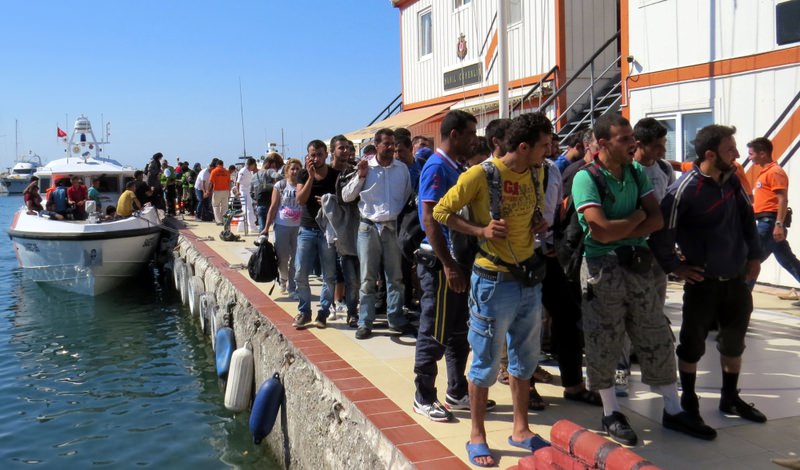 Migrants, whose boat was reportedly deflated by Greek Coast Guard, arrived at a Turkish port after they were rescued by Turkish fishermen on Aug. 13.
by Daily Sabah Aug 24, 2015 12:00 am

Ten days after a group of illegal immigrants were rescued by Turkish fishermen after their rubber boat was deflated by unknown assailants on the Aegean Sea, a Turkish newspaper published photos of a masked man aboard a Greek Coast Guard boat, who was reputed to be one of the assailants targeting migrants.

Around 50 migrants, mostly Syrians, were rescued by Turkish fishermen rushing to aid the screaming migrants who were stranded at sea after their boat was deflated by a spear-like tool by assailants aboard a speed boat off the Karaburun coast of the western İzmir province.

The Milliyet daily published a photo of a man wearing a skeleton mask aboard the Greek Coast Guard boat and claimed he was the same man that migrants saw during an attack as they were heading to the Greek island of Chios.

The masked man was sighted aboard a Greek Coast Guard boat sailing near Ayvacık in Çanakkale province that is popular among illegal immigrants seeking to cross to nearby Greek islands.

The man wearing the skeleton mask also fit the description in another incident in July 12. Hassan Akkad, a Syrian migrant, had claimed he and others encountered masked men aboard a Greek Coast Guard boat when they were traveling to the Greek island of Kos. The men allegedly forced their boat to return to the Turkish coast.

Milliyet also quoted other Syrians describing mask-wearing men in black clothes and speaking English. Muhammed, a Syrian migrant, quoted by Milliyet, said that four masked men aboard a speedboat approached their boat and fired three times on their boat. Abdulhadi, a migrant from Aleppo, Syria, claimed the same men raided their boat and forced them at gunpoint to take another boat and robbed them of their possessions.

Greece, the nearest gateway to Europe for illegal immigrants who flock to Turkey in pursuit of a better life in European countries, is coping with a record number of migrants arriving daily on its islands that are in close proximity to the Turkish coast. More than 160,000 migrants have arrived on the islands since January according to media outlets, and more are likely to come, as these islands see hundreds arriving daily all across the Aegean Sea.

Not every migrant is able to arrive on an island. Often traveling in unsafe, overcrowded boats, migrants risk death, as boats tend to capsize in bad weather. The Turkish Coast Guard, which stepped up operations this year in the face of the influx, intercepts many and rescues those struggling to survive after their boats capsize.

Every day, hundreds wait in seaside towns on the Aegean coast, a more than 2,600-kilometer-long coast stretching from Çanakkale in the north to Muğla in southwestern Turkey. At night and sometimes in broad daylight, they hop on dinghies arranged by smugglers to travel to Greek islands lying a few kilometers off the Turkish coast. The small inflatable boats are capable of carrying four people, but desperate migrants travel by the dozens, risking the capsizing of boats.

With conflicts and other problems in their countries worsening, it seems like Turkey will remain a hub for illegal immigrants seeking to travel to Europe.