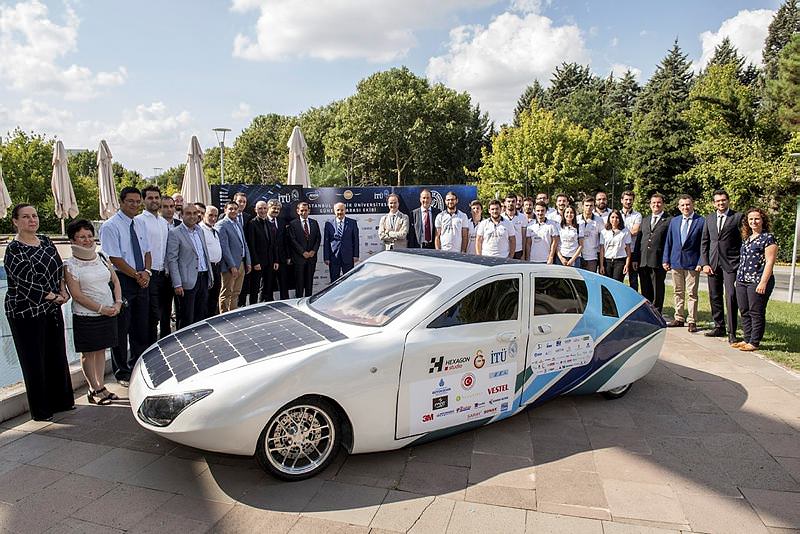 by Daily Sabah Aug 25, 2015 12:00 am
Istanbul Technical University (İTÜ) introduced Aruna on Monday, Turkey's first solar-powered four-seat "family" car. Built by a crew of students and academics from the university, the car was unveiled at an event in Istanbul.

Aruna, which takes its name from Hindu mythology, a personification of the reddish glow of the rising sun and the chariot pulled by seven horses, will compete in the World Solar Challenge, an international race that will be held in Australia in October, after a tour of Turkey.

The crew says the car has been designed to support domestic car production and show people that alternative energy sources can be used in daily life. Aruna is able to travel 500 kilometers at approximately 70 kilometers per hour with a solar energy system that costs only TL 5 ($1.69) per 500 kilometers.

İTÜ crews have already built seven cars in the past 10 years and garnered cups in solar power races but this marks the first time they have built a car with more than one seat.

Although the idea of a solar-powered car for public use is not new in Turkey, it marks the first time the idea was realized, though a mass production in the near future is not currently in the works. Earlier this year, a design team from the Middle East Technical University (ODTÜ) in Ankara has won seven awards at the International Design Awards held in the United States for Solar Taxi, a five-seat taxicab powered by solar energy.

Istanbul's transportation authority also introduced last week a solar-powered bus, the first in Turkey. The bus, except its engine, is powered by solar panels installed on its roof for its every energy need, from information screens and electronic ticket units as well as supplying additional power for the bus's battery.
RELATED TOPICS