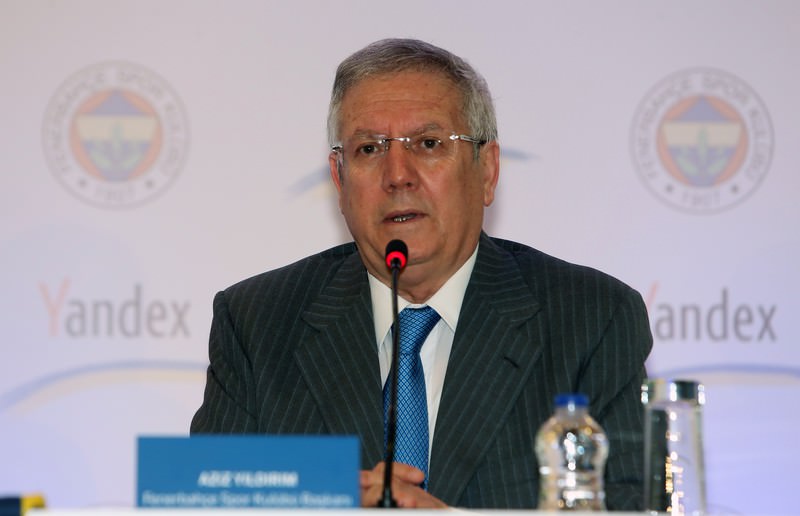 by Daily Sabah Aug 26, 2015 12:00 am
Aziz Yıldırım, chairman of Turkish club Fenerbahçe, has vented his fury at prosecutors linked to the controversial Gülen Movement in a televised interview over a match-fixing trial he was implicated in.

Referring to Zekeriya Öz, the prosecutor who launched a match-fixing investigation that led to the imprisonment of Yıldırım and other senior executives of the Istanbul side, the Fenerbahçe president told CNN Türk that "those who claimed I would flee Turkey (because of the investigation) are now wanted by red notice," he said. Öz and Celal Kara, another prosecutor linked to the Gülen Movement, fled Turkey hours before arrest warrants were issued for them earlier this month for an attempt to stage a coup to overthrow the democratically elected government. Two prosecutors were involved in a probe and sought to imprison top government officials under the guise of an anti-graft inquiry in 2013. The probe is regarded as an attempt by the Gülen Movement, led by U.S.-based cleric Fethullah Gülen, whose followers include police and judiciary officials and are accused of blackmail, forgery and the illegal wiretapping of thousands.

Yıldırım said, "Those trying to stage a civilian coup in Turkey carried out operations against us on July 3 (2011) but we withstood."

The Fener president served a one-year prison sentence in 2012 after he was found guilty of involvement in match fixing in several matches, and of running a criminal gang during a 2011 investigation. He was originally sentenced to six years in prison. He and five other defendants were released, after their appeal for a retrial was upheld by the Supreme Court of Appeals. But, the judicial process is still underway with a new hearing scheduled in the coming months.

Yıldırım and others have sought acquittal, claiming they were victims of a plot and convicted on false evidence. He had implied repeatedly that he was targeted by the "parallel structure," a name given to infiltrators of the Gülen Movement in state institutions. "The match-fixing case was a political trial with a political verdict. I don't respect the decision of this judiciary," he had said in an earlier statement after his imprisonment. He had claimed the case was planned long before the investigation was initiated and claimed he was illegally wiretapped.

Zekeriya Öz and Celal Kara remain at large. They were first reported to have traveled to Georgia, then Armenia and were recently sighted in Germany. A red notice, or an international arrest warrant, is sought by Turkish authorities for the two fugitive prosecutors.
Last Update: Aug 26, 2015 3:14 am
RELATED TOPICS