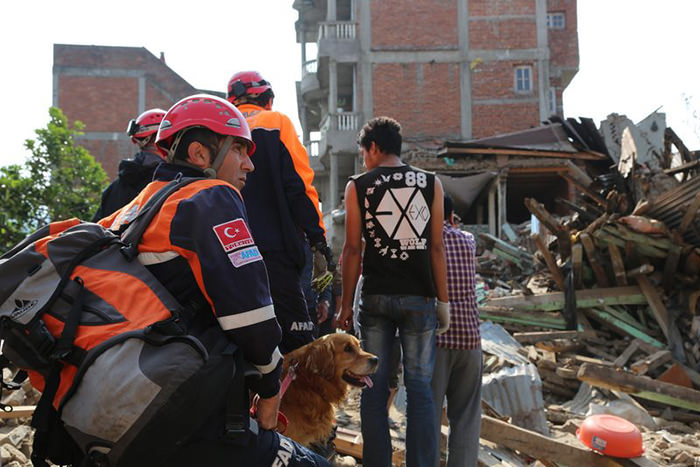 AFAD rescue teams in Nepal after the Nepal earthquake (File Photo)
by Anadolu Agency Aug 26, 2015 12:00 am
Turkey has carried out humanitarian work in over 40 countries across four continents, helping people reeling from the effects of natural disasters or civil wars, the country's Disaster and Emergency Management Authority (AFAD) has said.

Anadolu Agency has spoken to officials from AFAD, the Turkish Cooperation and Coordination Agency (TIKA), the Turkish Red Crescent, the Humanitarian Relief Foundation (IHH), and Doctors Worldwide in order to get information about some of the work they have done to date.

AFAD, for instance, has established 25 temporary housing centers for Syrian people in Turkey, offering accommodation to thousands who fled their country after the onset of civil war.

Three other housing centers were established in northern Iraq, with 52.8 million Turkish liras.

In the aftermath of the 9.0 magnitude earthquake and tsunami that devastated Japan in 2011, AFAD sent 60 tons of humanitarian aid worth 2.5 million liras to the country.

Turkey ranked third in the list of countries with the most international humanitarian work in 2012 and 2013, TIKA says in its Turkish Development Assistance 2013 report -- the latest such figures from the agency.

In 2014, the agency sent humanitarian aid worth 1.15 million Turkish liras to Myanmar, while another 1.16 million liras were spent in a joint project with UNICEF.

The GHA report in 2014 said: "Nine of the ten largest government donors in 2013 showed a rise in their giving from the previous year. The five largest in 2013 [U.S., U.K., Turkey, Japan and Germany] made some of the largest increases".

The most generous country by Gross National Income (GNI) is Turkey with 0.21 per cent, the report wrote.

The top five recipients were Ethiopia, Afghanistan, the West Bank and the Gaza Strip, Somalia and Pakistan, the report says.

Between 2002 and 2015, the Turkish Red Crescent spent $1.47 billion in humanitarian aid to help millions of people abroad, while spending over $29 million in 2015 alone.

Some Turkish nongovernmental organizations are also actively taking part in humanitarian aid work across the world.

IHH, for example, is one of the biggest aid foundations in Turkey; it has around 100,000 volunteers of all ages.

The foundation provided humanitarian aid for around 1.5 million people both in Turkey and 96 other countries during Ramadan last year.

Among the countries that Turkish humanitarian organizations send aid to are Bangladesh, Ethiopia, Pakistan, Somalia, Bosnia-Herzegovina, Yemen, Afghanistan, Palestine, Iraq and many others.

Tens of thousands of people from 40 countries were treated with 90,000 medical examinations and 5,000 surgeries supplied by Doctors Worldwide in the last two years.

This figure included around 10,000 heavily malnourished children, and 40,000 mothers and infants.

Turkey's official development assistance has increased every year from $85 million in 2002 to $3.3 billion in 2013, TIKA has reported.