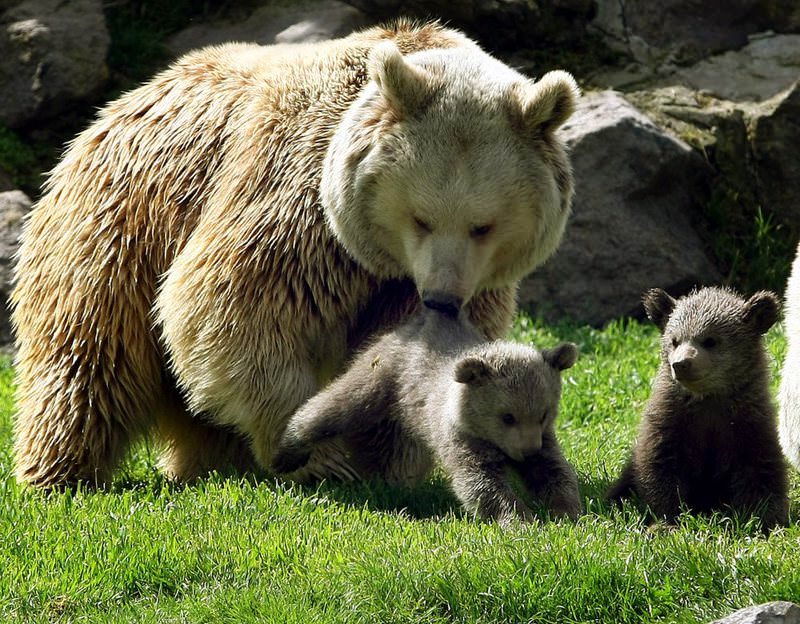 A brown bear and its cubs in their natural habitat inside Atatu00fcrk Forest Farm in the capital Ankara.
by Daily Sabah Aug 28, 2015 12:00 am

Animal rights activists slammed public tenders for hunters who were granted rights to kill wild animals, such as bears, in exchange for a hefty sum, claiming the animals should be preserved against extinction

Activists are enraged over tenders launched by the Forestry and Water Affairs Ministry that allow the hunting of bears and other wild animals by hunters paying fees. They claim the permission to hunt violated both domestic and international regulations.

Outrage over the hunting decision came after a new tender in northern city of Kastamonu, renowned as a home for brown bears, awarded the hunting of five bears to hunters who paid TL 10,000 ($3,430) per animal. A hunting party for October was greenlit by authorities for the five winning bidders. Tenders were also held in other cities in northern Turkey for the hunting of the grizzly bears.

Doğa Derneği (Nature Association), a local environmental organization, claimed the tenders violated Turkish and international regulations as well as the international treaties Turkey is a party to for the preservation of wildlife.

Brown bears are in the "wild animals" category under a law on hunting, and are therefore banned from hunting. However, another regulation allows for harmful wild animals to be contained, in line with national and international laws. Nature Association said brown bears are among the species that should be kept under strict preservation according to two international treaties Turkey signed. The association highlights that the ministry's decision to launch tenders clearly violated the regulations that do not include organizing hunting tenders.

Nature Association Director Dicle Tuba Kılıç said brown bears in Turkey were already in danger of losing their habitat due to damage to the environment. She added that bears especially pose a problem for beekeepers, but it was possible to prevent bears from damaging beehives without killing the animals.

More tenders were launched earlier this year to allow the hunting of animals ranging from wild goats and mountain goats to deers as part of efforts to boost hunting tourism revenues. Authorities defend that the hunting will not endanger the species and on the contrary, it contributes to culling overpopulated species and preserve the sustainability of wildlife.

Animal rights activists had already launched a petition to stop the hunting tenders, collecting more than 80,000 signatures. They claim that the given excuse for issuing the tenders - that is, culling overpopulated species - is based on estimated numbers, not scientific data that categorizes bears and other wild animals as endangered species.

Brown bears have made headlines in recent months after attacking hives and graves in search of food in northern Turkey. Nature Association has advised beekeepers to place beehives on trees whose trunks are covered with steel plates to fend off bear attacks.

Though hunting tenders draw the ire of activists, Turkey is otherwise known for its efforts to preserve wildlife as a country home to three biodiversity hotspots and a large variety of endemic species. A "wildlife corridor," which will connect small wooded areas with big forests to provide easy access for wild animals to larger habitats, are in the works. The project in northern and northeastern Turkey will connect isolated wolf, brown bear, lynx, wildcat, roe deer and other wildlife populations in national parks. Ministry officials say reforestation of Turkey that continues at a rapid pace may help to minimize conflict between humans and wild animals, which were forced to leave their habitat in search of food due to shrinking forests.
RELATED TOPICS