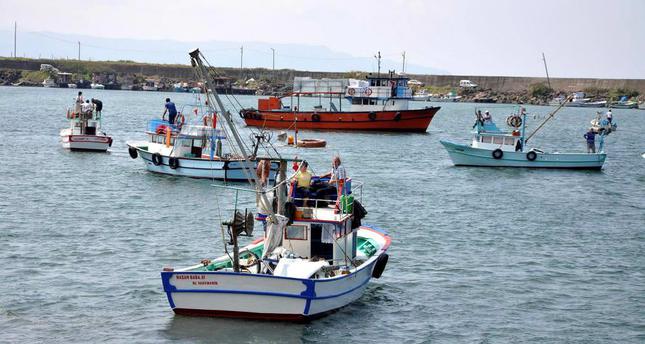 Fishermen in the Black Sea city of Trabzon set sail on Monday in an event to celebrate the opening of the new fishing season.
by Daily Sabah Sep 01, 2015 12:00 am

A fishing ban for more than four months officially ended on Monday for fishermen in Turkey, a country boasting access to four seas - the Black, Aegean, Mediterranean and Marmara Seas - in terms of fishing. Fishermen are hopeful for a boost in the catch this year though concerns are high over declining fish stocks.

Turkey saw a 30 percent decline in the amount of fish caught in the past decade, raising concerns on the effect of overfishing on fish stocks. Experts warn high levels of fishing, coupled with the growing popularity of amateur fishing, will likely drive numerous species to extinction soon.

Statistics show the amount of fish caught in 2014 was 231,000 tons, a sharp decrease compared to more than 334,000 tons in 2005. Anchovy, sardine and mackerel saw the lowest yield caught last year in the past 10 years. The amount of bottom fish, ranging from grey mullet to flatfish and bream, caught in the past 10 years have hit rock bottom, literally. Only the amount of blue fish, sprat fish and a few other species were spared from the decline, according to the statistics.

Şemsi Bayraktar, head of the Union of Agricultural Chambers of Turkey (TZOB), a trade union overseeing several fishermen's unions, says they expect an abundance in anchovy, mackerel and bluefish in the new season, which will end in seven and a half months with a new ban being imposed. Bayraktar said sustainable fishing is vital to the future of the sector, noting that Turkey failed to benefit from its fishing potential. He said fishing has been in a decline in the past three years while fish farming is on the rise. "Overfishing and off-season fishing in the past years affected the sustainability of fish stocks. We need policies to preserve the stocks," Bayraktar added. He said a balance in supply and demand should be maintained and consumption of sea food, which was below the world average, should be encouraged for a sustainable fishing sector.

Despite the worries over fish stocks, fishermen still have faith in a good catch while the public expects a decline in price of the fish that skyrockets if the catches decrease.

In Giresun, a Black Sea city, fishermen who completed the maintenance of their boats, were ready for the new season, setting their expectations high especially for the catch of mackerel. Hamdi Arslan, who heads a local fishermen's union in the city, says they expect "a good season." "By God's will, the catch will be high," he told Anadolu Agency, adding that the fish prices may be high at the beginning but they expected them to drop in time.

Eftal Mutlu, head of a fishermen's union in Ordu, another Black Sea city, told Anadolu Agency that mackerel would be the "season opener" while changes in the weather may cut short the season for mackerel fishing. Last season was a tough one for Black Sea fishermen as the migration route for anchovy in the Black Sea changed, forcing Turkish fishermen to sail further into Georgian waters for fishing.

Among the other challenges the fishermen face is pollution according to the Turkish Marine Research Foundation (TÜDAV), a nongovernmental organization, which warns against the red tide or algal bloom witnessed in the Black Sea, Marmara Sea and Aegean Sea this summer. Red tide is associated with mortalities in the fish population. TÜDAV links it to environmental pollution in the seas and calls on authorities to curb "land pollutants" such as waste disposal to the sea. TÜDAV also warns against non-indigenous species in Turkish waters and attributes a rise in those species to the newly opened Suez Canal in Egypt that reportedly caused the migration of Red Sea fauna to the Mediterranean. It calls on authorities to implement projects to prevent the invasion of bubblefish, lion fish and other species deemed harmful to fauna native to Turkish waters.
RELATED TOPICS