12 killed off the Turkish coast in latest refugee drama 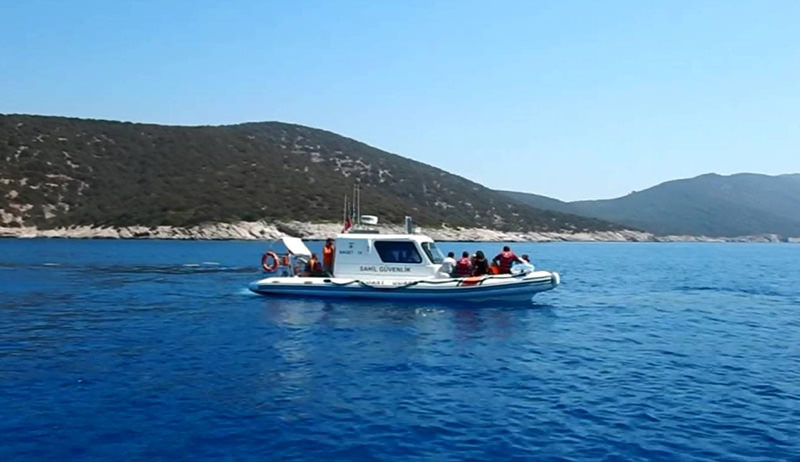 Twelve people were killed on Wednesday, as two boats carrying refugees attempting to cross to the Greek islands from the Turkish coast sank, at a time of a dramatic rise in the numbers of refugees risking their lives on the journey

Twelve Syrian refugees drowned when two boats they were using to travel to the nearby Greek islands from the Turkish town of Bodrum in the southwestern province of Muğla, sank early Wednesday. Two others were reported missing in the latest incident highlighting the drama of illegal immigrants that seek to cross into Europe in pursuit of a better life.

The Turkish Coast Guard rushed to the aid of the boats, in which refugees were traveling without life vests, and rescued nine men and four women and recovered bodies of victims floating near the boats. One of the victims was a toddler whose mother was hospitalized after she found that her baby was among the drowned.

In the last week of August, 2,164 refugees, mostly those from Syria, Turkey's northern neighbor where a four-year-old civil war rages on with no end in sight, were intercepted by the Turkish Coast Guard in the Aegean Sea. Statistics show a dramatic increase in the number of refugees. Last year, over 12,000 refugees were intercepted, while this number was 42,126 in the first eight months of 2015. Greece is also overwhelmed by refugees. More than 200,000 people have arrived in the islands so far this year according to statistics. In the past two days, the Greek Coast Guard said it had rescued 1,058 people at sea, as they were traveling from Turkey. From the Greek islands, they are transferred to mainland Greece on ferries that brought some 4,200 refugees on Tuesday night to a port near Athens.

Migrants risk their lives aboard overcrowded dinghies to reach islands dotting the Aegean Sea, the main gateway to Europe for those from Syria and Asian countries by sea. They pay at least $1,000 to smugglers to arrange a trip that often ends up being intercepted by the Coast Guard and at the bottom of sea. On Tuesday, 48 refugees from Syria were rescued after six rubber boats they boarded started sinking off the Bodrum coast. refugees had said the boats they bought from human smugglers were faulty and started to take on water as soon as they set sail from the coast.

The latest deadly incident involving illegal immigrants was in June. Six refugees were killed when their boat capsized, again, off the coast of Bodrum. Sixty others aboard the capsized boat, which was sailing to the Greek island of Kos, were rescued.

With its proximity to the Greek island of Kos, Bodrum is a popular spot for migrants risking journeys even in stormy weather at night and in small boats, densely packed with dozens of people.

As Turkey hosts more than 1.9 million displaced Syrians who have fled the conflict in their country, it is not unusual to see Syrians living in makeshift tents in parks or begging on the streets, but in Bodrum, as media reports indicate, their number has been swelling lately. Migrants with little money turn to begging to pay human traffickers or attempt to cross over to the Greek islands on their own. Media reports note a boom in sales of rubber boats and lifejackets in the town.

Though Turkey has a land border with two European countries, Bulgaria and Greece, the sea route is closer for refugees who flock to the country's 2,600 kilometer-long Aegean coast stretching from Çanakkale in the north and Muğla in the southwest, the two most popular provinces among migrants for their proximity to Greece. Refugees are those either already living in Turkey, often in impoverished conditions or those who use Turkey as a path to Europe, traveling from the country's southern border, which is hundreds of kilometers away from the Aegean coast.

Migrants contact smugglers through social media networks according to media reports. They bargain on the costs and negotiate possible routes for travel to Europe. Several social media accounts operated by smugglers inform migrants on where to stay temporarily while in Turkey, how boats operate and where to stay once they reach the Greek islands. Some smugglers also post messages promising to help forging fake passports for refugees.