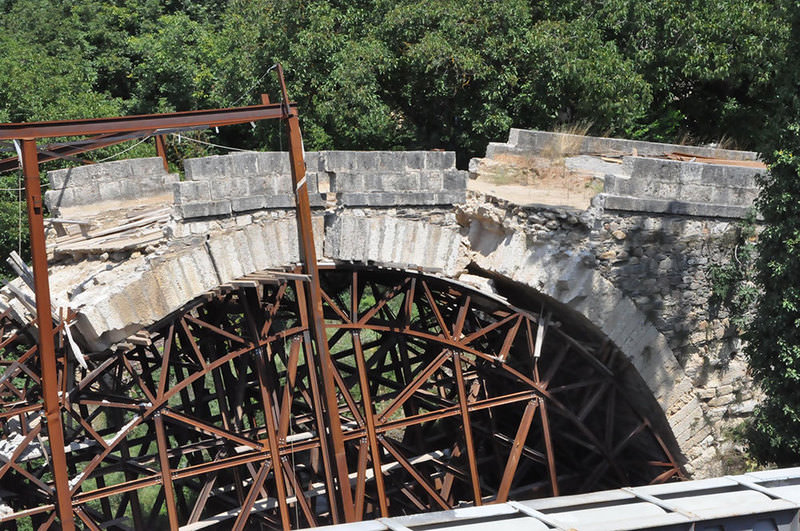 by Daily Sabah with DHA Sep 02, 2015 12:00 am
589 year-old Dandalaz Bridge located in Turkey's Karacasu district of the western Aydın province collapsed during restoration.

Famous for its construction method without using mortar or iron during Ottoman Sultan Murat II's reign in 1426, a tender was held by the Aydın Governorate and General Directorate of Highways to restore the bridge as some of its arch stones were falling.

The bridge, located near the ancient city of Aphrodisias, was suspended using 120 tons of steel; however it collapsed in January just after working hours, probably saving the lives of 20 workers.

Abdurrahman Çabuk, owner of the contracting firm that won the restoration tender, stated that the bridge collapsed due to a landslide and a crack unrecognized due to plants, and they are unable to restore the bridge in its current situation due to safety concerns.

Meanwhile, Mustafa Büyükyapıcı, mayor of Karacasu district, stated that this issue will cause great problems for the General Directorate of Highways and the contracting firm.

An official from the regional directorate of highways stated that they initially suggested rebuilding the bridge using original material and methods due to safety concerns; however, the Council of Monuments did not accept their proposal.

The fate of historical monuments and buildings during restoration has recently came under fire as the 2,000-year-old Ocaklı Ada Castle in Istanbul's Şile district fell victim to a botched restoration job, with its final figure resembling the popular cartoon character SpongeBob SquarePants.