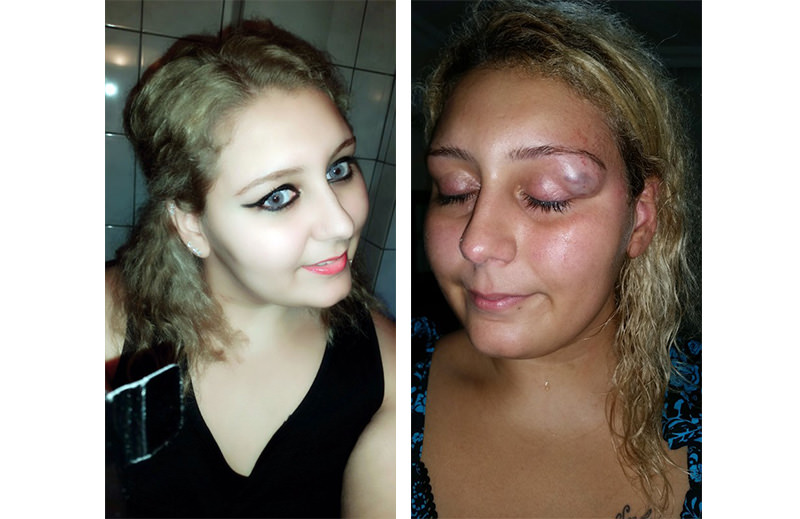 |Ku00fcbra Yu0131lmaz, before and after domestic abuse (u0130HA photo)
by Daily Sabah Sep 02, 2015 12:00 am
Impatient with authorities' indifference toward her case, Kübra Yılmaz, 22, posted footage on her blog capturing the domestic abuse she suffered from her ex-boyfriend, Serdar D.

The woman released photos showing bruises on her face along with security camera footage of her former boyfriend beating her outside of her Antalya apartment. Yılmaz claimed she filed countless complaints against him, but the authorities did not help her, and her former boyfriend was never arrested.

Yılmaz said in her blog that she decided to document her suffering online "so you will know who killed me if I get killed one day." She stated that she locked herself in her apartment for fear of her ex-boyfriend and was beaten by him last week, releasing black and white security camera footage showing a man dragging Yılmaz outside after she answered the door. The man is seen punching and kicking her in the footage.

She said she went to a nearby gendarmerie station for help and showed security personnel the footage, but they were "uninterested" and "did not lock up the man who beat me, let alone interrogate him." Yılmaz said Serdar D. was always stalking her, stealing her money and beating her. She said Serdar D. was already under probation and was required to show up at the gendarmerie station a couple of times every week, but nobody "touched him."

Halime Şenli, a lawyer who heads the Antalya Bar Association's women's rights division in Alanya, said they were investigating the allegations and would file a complaint both against Serdar D. and the negligent officials Yılmaz approached with her concerns.

The incident highlights intensifying concerns in Turkey about spousal violence, which is almost always directed against females. The government has launched a nationwide campaign to raise awareness of the issue and developed a plan of action to curtail the violence. Amid new measures, which will soon be implemented nationwide, are a tracking system for domestic violence perpetrators and tougher sentences in cases involving violence against women. Nevertheless, the problem cannot be resolved only by adopting new security measures; experts stress that a change in the public mindset and educating younger generations is necessary to eradicate the problem.

The latest figures provided by a Turkish newspaper and Anıt Sayaç, a website recording the number of fatal domestic violence cases, counted the number of murders to have reached at least 144 in the first six months of 2015, 14 percent higher than the figure for the same period in 2014. However, these are unofficial figures, as the authorities do not release statistics regarding murders targeting women due to the police failing to distinguish domestic violence cases from murders with other motives.