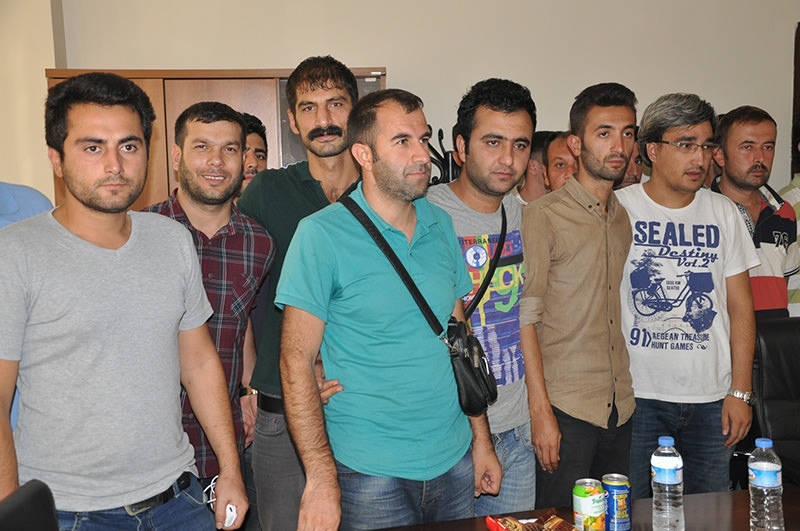 | AA Photo
by Daily Sabah Sep 08, 2015 12:00 am
A total of 20 customs officials who were kidnapped by the PKK terrorist organization in August, have been released on Tuesday at around 9:30 a.m.

10 customs officers working at the Üzümlü border crossing between Turkey and Iraq (in southeastern Hakkari province) were kidnapped by PKK terrorists on August 10 while they were on their way to work.

Less than half a month after this incident, on August 21, another 12 people, 11 of whom were customs officers and one bus driver, disappeared as they were returning home from work.

The customs officials were carrying out their duties at the Kapıköy border gate (in the eastern Van province) between Turkey and Iran. On August 23, the driver and one of the 11 customs officers were released.

On Tuesday, the PKK released all the 20 customs officers and handed them to the NGO Human Rights Association (İHD in Turkish), Şırnak bar association, and a committee from People's Democratic Party (HDP) in northern Iraq.

İHD's chairman, Öztürk Türkdoğan, reportedly said, "The 20 customs officers were released in a rural area near Dohuk [a governorate within Iraq's Kurdistan Region]. The İHD committee that took the delivery of the customs officers has left Dohuk for Turkey. We think that they will arrive at the Habur border gate within a couple of hours."

Turkey's Ministry of Customs and Trade, Cenap Aşçı, made a statement on Tuesday, saying the 20 customs officers were released upon the state's initiatives.