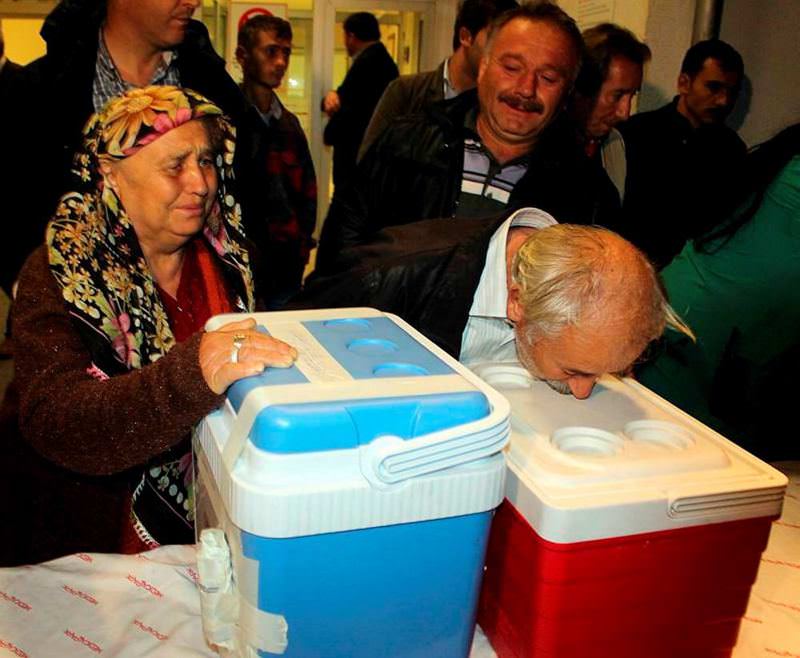 Relatives of a deceased man who donated his organs in the city of Ordu embracing the coolers carrying his organs.
by Daily Sabah with AA Sep 09, 2015 12:00 am

Turkey saw a record 80 percent increase in people donating their organs last year, thanks to an awareness campaign in the country where such donations were once shunned for so-called religious and moral reasons

Organ donations gained a new momentum in Turkey with a record increase in the number of people agreeing to donate their organs in the case of a fatal accident. Last year, donations rose 80 percent, to reach 145,000 from about 80,000 in the previous year.

The increase is attributed to a higher degree of awareness in the public stemming from campaigns working to correct the wrong perception that Islam does not allow donations. The western city of İzmir led the list with the most donations with 20,000 people signing up to donate their organs after their death, while the eastern province of Iğdır had only one resident sign up to donate his or her organs last year. Istanbul and the southwestern city of Muğla followed İzmir. Ayhan İzzettinoğlu, head of the health authority in İzmir, said the city had the highest rate of donations in the past few years, which was thanks to the health authority's campaign to raise awareness about organ donation. Religious authorities such as muftis and imams play a key role in awareness campaign, and İzzettinoğlu told Anadolu Agency (AA) clerics contributed to their campaign.

Turkey's state-run Presidency of Religious Affairs (DİB), the highest religious authority in Turkey, launched a new campaign for imams to raise awareness about organ donation earlier this year. DİB head Mehmet Görmez urged imams to donate their organs first before advising the congregation to do so. The DİB had quashed a religious debate on whether donating organs is permissible in Islam by introducing the campaign.

Görmez had said in a statement on organ donation that he found it odd that it has been the subject of contention for decades among clerics. "Life and the value of a human being's lives are at the center of all religions," Görmez said. He quoted a verse from the Quran that says that killing someone is equal to killing humanity and giving life to another is equal to giving life to humanity. Görmez said religion should not be viewed as an obstacle to organ donation: "Of course, people may set conditions, but they should eventually consent to it."

Organ transplants are vital for many patients and experts say many people die on the waiting list for organs due to the lack of donations. Every year, more than 100,000 people across the globe die due to the shortage of donated organs.
RELATED TOPICS