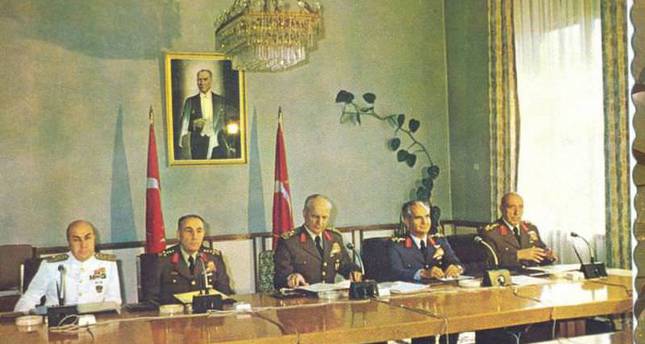 | File photo
by Daily Sabah Sep 12, 2015 12:00 am
Turkey commemorates the 35th anniversary of the September 12 1980 coup d'etat where Chief of the General Staff Kenan Evren toppled the coalition government of Süleyman Demirel and dismissed the Turkish Grand National Assembly (TBMM).

Considered as a disgrace to the history of Turkish democracy, Sept 12 coup marked the third time the Turkish Armed Forces took hold of the democratically elected government and declared a state of emergency where thousands of people were unlawfully detained and even tortured to death, the constitution was suspended and political parties were closed while their leaders were questioned, prosecuted and imprisoned.

According to reports, 171 people died as a result of torture during interrogation while 30,000 people were dismissed from their duties at work as newspapers could not publish for 300 days. Additionally, over a million people were blacklisted and 98,404 people were tried on charges of being members of a leftist, a rightist, a nationalist, a conservative and similar ideological organization.

The National Security Council led by Kenan Evren took care of all critical decisions pertaining to the government until 1983 and martial law was implemented throughout the country where curfews and rationing became common measures in the everyday lives of Turkish people.
Amongst the detained were the Republican People's Party's former leader Bülent Ecevit (late) who was interrogated for a speech he carried out in 1975. Likewise, the leader of National Salvation Party (MSP) Necmettin Erbakan (late) was interrogated under the scope of challenging the secular nature of the state along with 33 colleagues.

One of the most important implications of the coup was that over 20,000 people sought political refuge in other countries while around 300 people died due to unknown and suspicious causes. The damage that it has caused to Turkish democracy can still be seen today as the constitution that was put into effect after the coup is still in use.

Kenan Evren who led the coup died in May 2015, whereas the last living commander of the coup, Tahsin Şahinkaya, died at 90 in July.