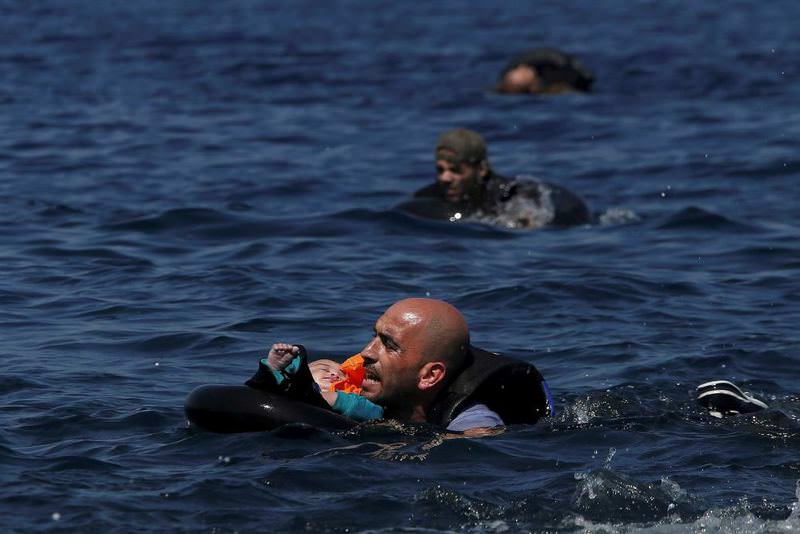 A Syrian refugee holding an infant in a lifetube as he and others swim to the Greek island of Lesbos after their dinghy deflated meters away before reaching the island from Turkish shores.
by Daily Sabah Sep 15, 2015 12:00 am

Tragedy strikes migrants risking their lives to reach Europe, and their deaths are now the subject of ‘tasteless and disrespectful' cartoons in the French magazine Charlie Hebdo. Greek authorities said the death toll may rise in Sunday's sinking of a migrant boat off a Greek island near Turkey that killed 34 people including children

The Greek coast guard was on the lookout for more bodies or survivors yesterday one day after a wooden boat carrying migrants who left the Turkish coast to reach the Greek island of Farmakonissi sank. At least 34 people had died Sunday in the latest tragedy to hit migrants who risk their lives to get to Greece, their closest gateway to the EU from Turkey.

The incident came some 11 days after the death of Aylan Kurdi. Images of the lifeless body of Kurdi, 3, a Syrian boy, on a Turkish beach where he was washed ashore, had highlighted the plight of refugees flocking to EU countries in search of a safer life. Kurdi is the subject of two cartoons in French satirical magazine Charlie Hebdo whose attempt to satirize Europe on the response to the migrant crisis was branded "tasteless and disrespectful" by social media users who expressed outrage over two cartoons in the magazine. One of the cartoons shows an illustration of the photo of Kurdi lying lifeless on the beach with the caption: "So close to his goal," and a billboard in the vein of a McDonald's ad saying: "Two children's combos for the price of one." Another controversial cartoon titled: "The proof that Europe is Christian," features a man, supposedly Jesus Christ, standing on water next to the legs of a child above the water with a caption reading: "Christians walk on the water, Muslim children sink."

The cartoons received a harsh reaction on Twitter with some users describing it as tasteless and disrespectful to the memory of Kurdi and questioning if the magazine, known for regular publication of controversial cartoons especially on religious matters, would satirize the death if the victim had been a Jewish boy. Charlie Hebdo's brand of shock-value humor has been criticized for excluding issues the magazine supposedly regards as off-limits for satire and the constant targeting of Muslims.

Meanwhile, more dead children turned up in the Aegean Sea as 15 children were reported among the dead off Farmakonissi. Greek coast guard vessels and divers combed the area for more potential bodies or survivors while Merchant Marine Minister Christos Zois flew to the island. Since Friday, 1,429 people were rescued in 58 operations off the Greek islands, according to the Greek coast guard. On Saturday four children went missing when another boat carrying migrants capsized off the Greek island of Samos.

The boat sank due to bad weather and 68 people were rescued from the sea. Another 30 people in an overloaded boat swam to safety. The boat had departed from Didim, a seaside town in the Turkish province of Aydın, one of the popular spots for migrants, mostly Syrians, who attempt to reach the Greek islands from the nearby Turkish coast. Releasing the latest figures, the Turkish Armed Forces, which oversees the countries Coast Guard, said 44 migrants were intercepted off the coast of Didim one day before the deadly incident. Between Sept. 8 and Sept. 11, 2,358 migrants were rescued off the Aegean coast, which stretches for hundreds of kilometers from Çanakkale in the north to Muğla in the south.

With war raging in neighboring Syria, Turkey struggles to cope with a steady flow of refugees and migrants seeking to cross into Europe. Last year, 12,884 migrants, including Syrians, were intercepted on the Aegean by Turkish authorities while the number of people intercepted since January this year has already reached more than 47,000.
RELATED TOPICS