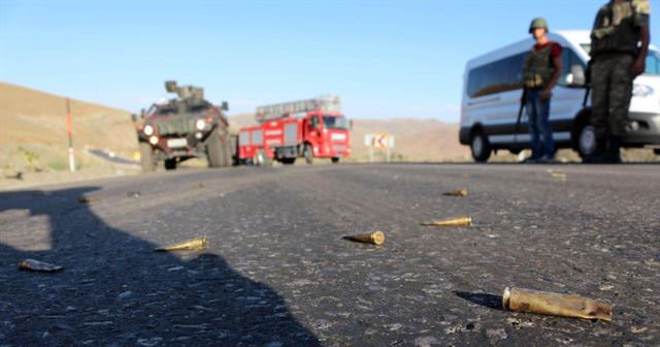 Nine PKK terrorists killed in Siirt, while three more terrorists captured and a large number of guns and ammunition seized in Erzurum province. A full scale counter-terror operation was launched in the same day leaving 32 terrorists dead in southeastern Turkey

A shootout between the PKK terrorist organization and a special operations team broke out on Tuesday leaving nine terrorists dead.

Terrorists opened fire on a military base in Siirt with long range weapons on Tuesday evening. No deaths or injuries have been reported for the government, while six terrorists were killed in the immediate shootout that followed the initial shots.

Three other terrorists trying to escape were killed in a nearby village shortly after.

A full scale counter-terror operation was launched in the same day leaving 32 terrorists dead in southeastern Turkey. 17 terrorists were killed between the Tunceli and Erzincan provinces, one terrorist in Van, five in Hakkari and nine PKK terrorists in Siirt.

In a separate incident on the same day in the Erzurum province three PKK terrorists were captured while a large number of guns and ammunition were seized.

A suspicious vehicle did not stop at a military checkpoint set up in the province to prevent supply to the terrorist organization. An armed conflict then pursued leading to the capture of three terrorists.