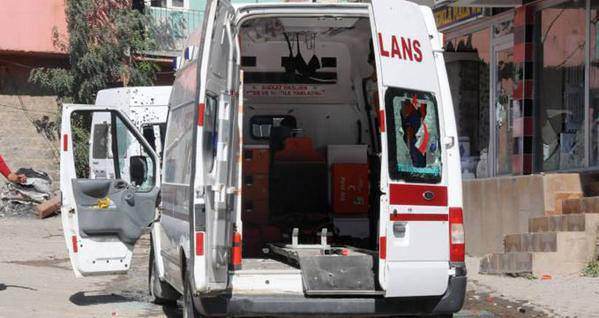 by daily sabah Sep 25, 2015 12:00 am
Turkey's Minister of Health Mehmet Müezzinoğlu stated on Friday that a group of PKK terrorists kidnapped an ambulance driver who was on his way to collect wounded security personnel following a terror attack in Beytüşşebap district of southeastern Şırnak province.

Speaking at an Eid event organized by AK Party's Bursa branch, Müezzinoğlu said that the driver was kidnapped by PKK terrorists before he was killed. "Terror has ruined our Eid. We have two martyrs today, and 11 of our personnel were wounded by terrorists. We still cannot reach our health personnel who were on the way to the scene to collect our wounded security forces," he said.

While the minister was giving the speech, he was informed that the ambulance driver was killed by PKK terrorists following the kidnap. Upon hearing the news, "The nation will never forget the crimes committed by the PKK, and will make the terrorists pay for them," the minister added.

Formed in 1978, the terrorist group which also aims civilians in its attacks had been fighting the Turkish government for an independent state until the early 2000's. The group then shifted its goal to autonomy in predominately Kurdish inhabited regions of Turkey.