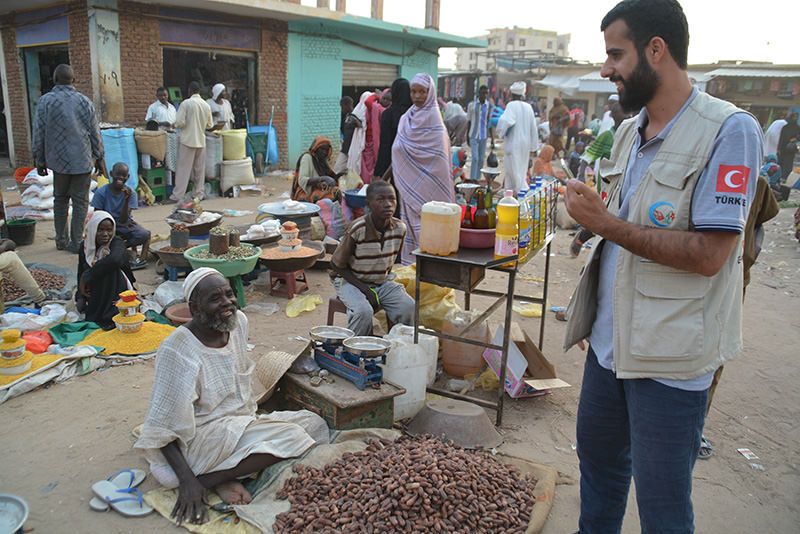 | AA Photo
by Anadolu Agency Sep 28, 2015 12:00 am
Abdel-Wahid Yusuf Ibrahim, governor of Al-Fashir, capital of Sudan's Darfur region, thanked the Turkish people on Monday for relief activities carried out in the region by Turkey's Cansuyu relief organization during the recently observed Eid al-Adha holiday, also known as the "Feast of the Sacrifice".

Ibrahim said Turkey had always helped the Sudanese people with little thought of its own interests.

"Turkey has not demanded anything of us in return for the aid they sent us," he said.

He also voiced appreciation for the Cansuyu relief organization's donation of 250 heads of cattle to local inhabitants of the region, noting that, in Al-Fashir, African Muslims had had an opportunity to meet white Muslims for the first time.

During the four-day Eid holiday, the Cansuyu relief association distributed at least 250 heads of cattle, along with numerous first-aid packages, to local inhabitants of Darfur's Al-Fashir area and refugees.

Ahmet Musa Kaya, the Cansuyu association's representative responsible for the Al-Fashir area, told Anadolu Agency that thousands of internally-displaced people currently faced starvation, grappling with lack of food and water due to ongoing conflict in Darfur.

The Eid al-Adha holiday, which ended on Sunday, commemorates Prophet Ibrahim's (Abraham's) willingness to submit to God's will by sacrificing his son (a request Ibrahim was ultimately not forced to carry out).

Muslims traditionally perform a ritual sacrifice for the Eid, usually a sheep, goat or cow.