Terrorism and boycott call do not deter students in southeast provinces 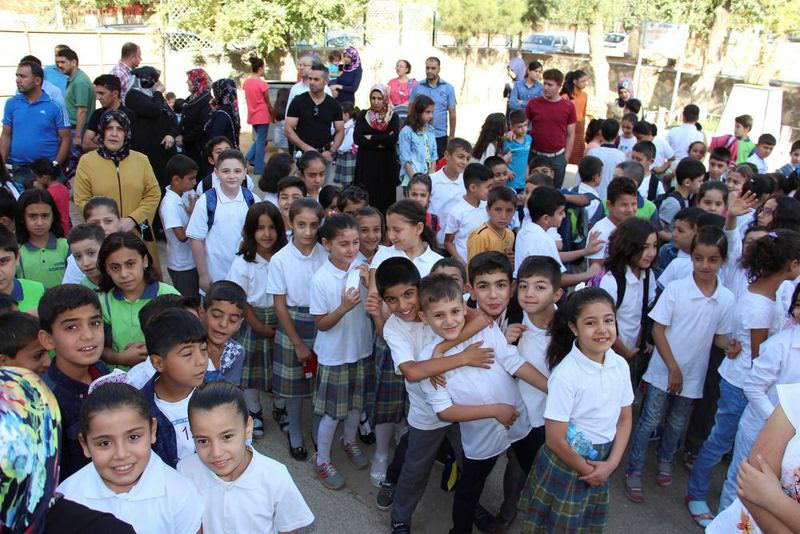 The school year has started in the southeastern provinces of Turkey despite being plagued by frequent terror attacks by the PKK and a call to boycott education in Turkish by the groups affiliated with the PKK. Students did not heed to the potential threats and overwhelmingly flocked to schools while only a small number of schools were closed due to security concerns.

Increasing attacks by the PKK, which made a bloody comeback in July after a lull in its activities thanks to a government-sponsored reconciliation process and school boycott, had raised concerns about attendance in schools in the predominantly Kurdish southeastern and eastern regions. Both regions are under immediate threat of the terrorist organization whose supporters are the most active, especially in terms of attacks targeting security forces.

Schools and children are also the targets of the PKK. In the past few weeks, a high school in the eastern city of Van was the scene of a bomb attack followed by gunfire. A highly explosive device was found near a primary school in the same district. In Diyarbakır, a southeastern city, five children were injured when a bomb planted by the PKK exploded.

Moreover, several groups linked to the terrorist organization, made a call to boycott the schools. The PKK, which claims to fight for Kurdish self-rule in southeastern Turkey, does not recognize the Republic of Turkey's presence, such as public schools in the region, and PKK-linked groups call for Kurdish education in the region's schools. Turkey offers selective Kurdish courses at schools but rejects calls for the entire curriculum to be in Kurdish.

All these developments did little to daunt students and teachers from attending the schools, except for some concerned parents who preferred not to send their children to schools for fear of a terror attack.

In Diyarbakır, a big city in the southeast where the PKK frequently targets security forces as well as civilians, 18 schools in the districts of Bismil, Silvan, Sur and Hani are closed due to security concerns. A curfew was in place in Bismil for one day on Monday because of deteriorated security and to hunt down PKK members. Students in closed schools are transferred to other schools. The remaining 1,550 schools in Diyarbakır are open while only 10,750 students out of 500,000 students have not attended the school, apparently as part of the school boycott.

In Silvan, schools in some neighborhoods are shut down as they were located in areas where PKK supporters dug holes to block access by security forces and set up explosive-laden booby traps. Schools in the district were already heavily damaged in terror attacks.

The PKK also threatens drivers of school buses operated by private companies by means of burning down the vehicles if they continue to carry students.

Despite heavy security measures, some parents are still concerned, as the PKK's affiliates remain active in the region and because of the high prevalence of bomb attacks.

S.B., who gave only his initials, said his daughter was attending a vocational high school in Silvan but he did not allow her to go after they found out about explosives planted on the streets around the school. He said other parents shared his concerns. "Education authorities plan on relocating students to other schools, but we are still anxious. We hope the barricades and bombs placed by the PKK will be removed as soon as possible," he said. S.B. also said that terror threats have forced many families to leave the district.

Security concerns are also high in Nusaybin, a flashpoint district of the Mardin province where streets are dotted with trenches and barricades set up by the terrorist organization's supporters. Ten out of 40 schools in the district have a drop in attendance, as they are located near those streets. A.A., whose two children attend a school in Nusaybin, says he was afraid of sending his children to school as "there may be explosives in the trenches."

As for the eastern parts of Turkey, the school boycott was largely ignored by families who sent their children to the schools in the region, according to authorities. Ali Eyyüpkoca, head of the local education authority in the province of Tunceli, told Anadolu Agency that they did not encounter any disruption to the education due to the boycott and said Tunceli boasts a high level of school attendance and a high rate of literacy among girls who are usually forced to drop out of school early by their families, especially in rural areas. He said out of more than 11,000 students in the province, only a few did not show up on Monday, the starting day of the new school year, and those are the students who had to travel to towns from remote villages.

The boycott was ignored as well in the eastern provinces of Iğdır, Muş and Bitlis according to authorities.
RELATED TOPICS