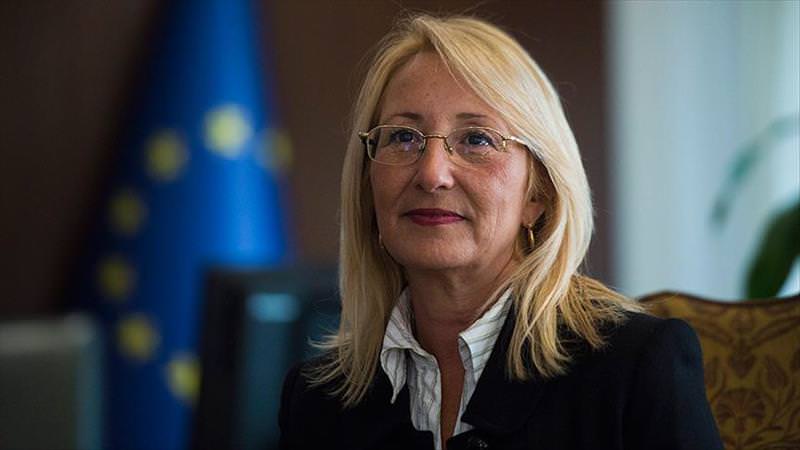 by Anadolu Agency
Oct 11, 2015 12:00 am
The bomb attack in Ankara was designed to cause political uncertainty ahead of the Nov. 1 general election, Turkey's EU Minister Beril Dedeoğlu said Sunday.

"The main message is to create an insecure atmosphere by targeting so many people because you don't know the perpetrator," she said in a live TV interview on CNN Turk.

She added: "In the present circumstances, the first thing that we need to do is be calm."

In the deadliest attack in recent Turkish history, twin explosions killed 95 people gathering for a peace rally in Ankara on Saturday. No group has claimed responsibility but Prime MInister Ahmet Davutoglu has suggested ISIS or PKK terrorists could be behind the attack.

Dedeoğlu, who joined the interim Cabinet last month, said the attack was also targeted to cause "public indignation".

She claimed those behind the blasts were attempting to "direct Turkish policy by way of the PKK" and take Turkey "out of the picture, especially over Syria."

Although the meaning of her comments were not clear, over the last three months Turkey has increased its support for the anti-ISIS coalition in Syria while also renewing its battle with the PKK terrorist organization at home.

In addition, the PKK is affiliated to Kurdish forces fighting ISIS in Syria.

Asked if she was optimistic about the revival of peace talks with the PKK, she added: "As the weapons speak mutually, the solution is very difficult. What makes me hopeful is people's wish to end the conflict."

The renewal of violence in late July - following a suicide bomb attack on pro-Kurdish activists in Suruc - ended a two-and-a-half year cease-fire while the Turkish government and the PKK sought a lasting resolution to the 31-year conflict between the terrorist organization PKK and the Turkish state.
Last Update: Oct 11, 2015 5:23 pm