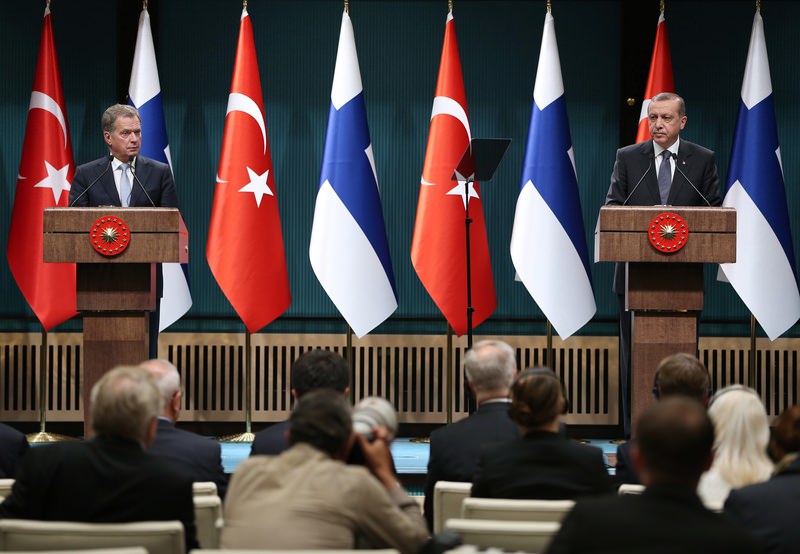 Speaking at a press conference with Finnish President Sauli Niinistö in Ankara, Erdoğan said he gave the necessary orders to the DDK by the authority granted to him in Article 108 of the Constitution to conduct an investigation and added that the group behind the attack will soon be identified.

Erdoğan also said they have received intelligence suggesting that the Ankara attack has roots in Syria.

He strongly condemned the bombing and said the terror attacks were committed against the Turkish nation and the target was not only the people demonstrating in Ankara, but the whole nation.

Asked about flaws in security at the rally, he told reporters: "There was certainly a mistake, a failing, but the dimension of it will be unraveled by the investigations."

Niinisto condemned the attack and offered condolences to the victims' families. "We are with Turkey and working against terror and extremism," he said.

Erdoğan and Niinisto laid a floral tribute Wednesday morning at the scene of Saturday's suicide bombing.

They held a minute's silence and laid carnations in front of the train station where the twin bombings took place. The Turkish and Finnish first ladies, Emine Erdoğan and Jenni Haukio, and interim Interior Minister Selami Altınok also attended.

The DDK is attached to the presidency and is able to conduct all inquiries, investigations and inspections of all public bodies and organizations and all enterprises upon the request of the president.

The twin suicide bombings in Ankara – the deadliest attack in modern Turkish history – were set off by two suspected suicide attackers in a crowd of leftist, pro-Kurdish and union activists at a peace rally.

The attacks near Ankara's main train station left the bodies of dead demonstrators strewn across the ground. The bombings also wounded over 500 people, dozens of whom were hospitalized and are in intensive care, according to the Prime Ministry.

The blasts have shaken Turkey as the country approaches the snap general election on Nov. 1, while counterterrorism operations continue in the southeast and the ongoing civil war across its southern border in Syria.
Last Update: Oct 14, 2015 3:37 pm
RELATED TOPICS