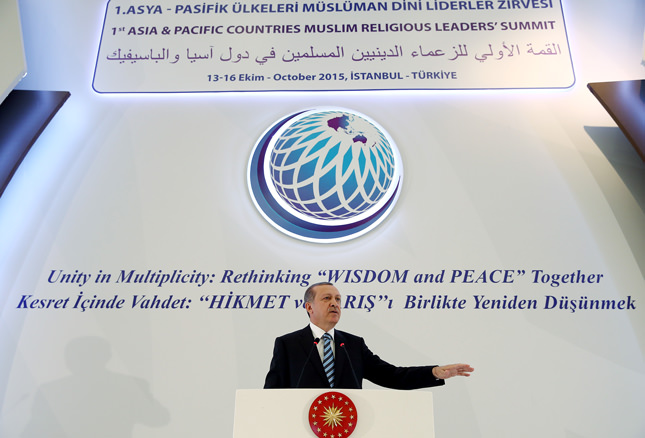 by Daily Sabah with AA
Oct 16, 2015 12:00 am
President Recep Tayyip Erdoğan has accused militant groups such as ISIS and al-Qaeda of exploiting religion.

"I would like to indicate sadly that yesterday al-Qaeda, today ISIS, the structures of which the only capital is to exploit religion and use it as a brutal weapon, are threatening our future," Erdoğan said addressing the closing session of the first Asia-Pacific Countries Muslim Religious Leaders' Summit in Istanbul on Friday.

"Those [structures] have nothing to do with Islam," Erdoğan said to a crowd mainly consisting of Muslim officials from several Asia-Pacific countries, including Afghanistan, India, Pakistan, China, Indonesia, Malaysia, Sri Lanka, and Bangladesh.

"The target of these organizations, which do not hesitate to commit the most murderous of crimes, are Muslims," Erdoğan added. He noted that these types of groups sought a clash within civilizations, not between civilizations.

"The future of millions of people is held captive for the benefit of five UN countries, such as in Syria, Libya and Iraq," he stated.

Turkey is part of a U.S.-led coalition of over 60 countries combating ISIS, which has claimed control of large swaths of territory in Iraq and Syria in 2014.
Last Update: Oct 16, 2015 6:23 pm