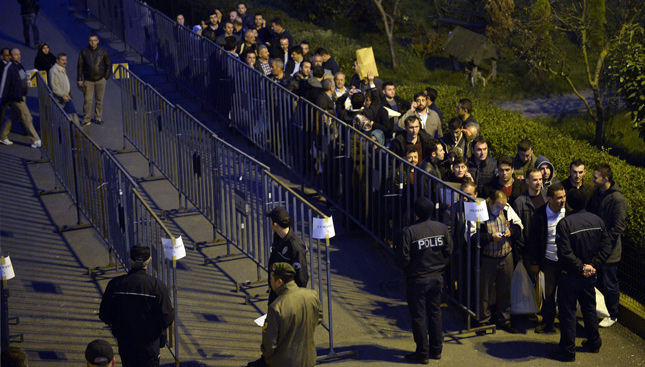 Several suspects, including a polling clerk have been detained in Turkey's southeastern region for election irregularities

Police detained a polling clerk and several other people across Turkey's southeastern provinces on Sunday for election irregularities.

Following notices sent to crisis management desks at the governor offices, police said that they detained suspects who allegedly "tried to suppress the will of the voters".

Election in Turkey's southeastern region started at 7 a.m. local time, while it started at 8.00 a.m. elsewhere in the country. Officials at the crisis management desks established in the governor offices are working to ensure that the election is carried out peacefully and people's will is reflected in the polls.

A poll clerk was discharged by an election board in Batman province for alleged manipulation of voters. Kerem Tekin, a polling officer in Yavuz Selim neighborhood, was suspected of secretly guiding voters at the polling station.

There was tension in the same area between the police and supporters of the Peoples' Democratic Party (HDP), when the group ignored police warnings to leave the polling station. The group was allegedly putting locals under psychological pressure. Batman's former Mayor Sabri Ozdemir, who was recently dismissed from his office, arrived at the scene and made the group disperse.

Police also detained five people in Diyarbakir province, who were suspected of suppressing the will of the voters. Poll clerks in Kayapinar district did not allegedly allow a youngster to vote, who was carrying a flag of the Kurdish YPG, the armed wing of Syrian Democratic Union Party (PYD).

One person in Siirt province was also detained for allegedly guiding voters at the polling stations. Kemal Bektas was allegedly trying to persuade people in Algul neighborhood to vote for HDP. When he ignored the warnings of security forces, police detained him.

Two others were detained for alleged illegal propaganda on the outskirts of Siirt. Aged 15 and 17, the two suspects were making election propaganda using a sound system in their car.

In Kiziltepe district of Mardin province, a criminal complaint was filed against three people who were suspected of forcing citizens to vote. They were also suspected of threatening observers from the Justice and Development (AK) Party.

Citizens in Ismet Pasa neighborhood of Sirnak province lashed out that some ballots voted in favor of HDP had been stuck on the windows of a polling station, while polling officers allegedly ignored the criticism. Voters Sadun Onuk and Turan Zeyrek complained that such manipulations were illegal and that some polling officials just sat back and watched.