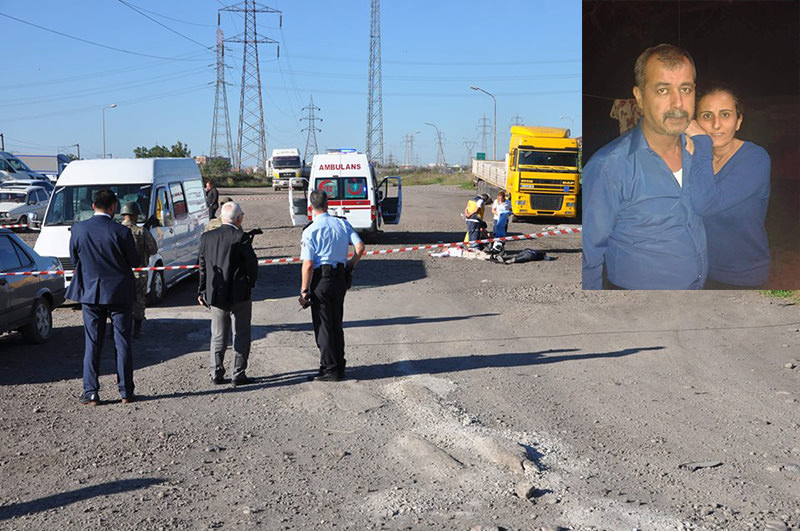 | DHA photo
by daily sabah
Nov 04, 2015 12:00 am
45 year-old Nedim Ünal killed his wife on Tuesday and committed suicide right after in Turkey's southeastern province of Hatay. Just hours before his actions, Ünal wrote on his Facebook account the he "Wore my burial shroud" and was "ready."

Ünal who was working at a bakery in Hatay's Payas district, saw his wife at around 2 p.m on Tuesday. According to media reports, the two had problems and therefore had been living separately for a while now.

Ünal told his wife Serap that he wanted to talk with her, to which she responded negatively. The consequent argument led to the man taking out his pump-rifle and fatally shooting his wife, Serap.

Right after the murder, Ünal shot himself with the same rifle.

The two were reported to have two children together.

Ünal's Facebook account embodied some posts that foresaw the horrible incident. On the same day of the incident, at 10.57 a.m. he wrote on his wall, "I wore my shroud, ready," and just one minute later, "Good bye to all my beloved."

Also, in a different post, he shared a picture of his deceased daughter's grave, saying, "Wait, I am coming."

Almost on a daily basis, women in Turkey perish at the hands of violent husbands. According to human rights monitor Bianet, in the first nine months of 2015, men have killed 211 women, raped 97 women, forced 152 women to prostitution, injured 290 women, harassed 173 women.

Bianet reports that 14.5 percent of women were killed because they wanted to break up/divorce or rejected their lovers' proposal to make up.

President Erdoğan had described violence against women as the "bleeding wound" of the country after Özgecan Aslan was stabbed and beaten to death after trying to fight off a man trying to rape her on February 11, 2015.

The particularly brutal attack on Özgecan Aslan, 20, had prompted nationwide protests and condemnation by politicians at the time.
Last Update: Nov 04, 2015 7:19 pm