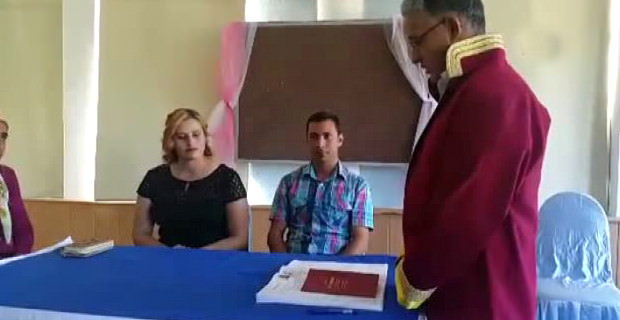 A registrar of marriages in Turkey's southwestern Muğla province got angry at a groom who jokingly said 'No' to the much-awaited question of "Are you the groom lawfully to marry the bride?", as a result of which he left the ceremony without wedding the pair.

The incident occurred in the city of Milas, near Bodrum in the country's Aegean region. Dilek Berberler and İsmail Üstün were at the district registry office on the day when they were given an appointment for their marriage to take place.

Everything was going well until the groom jokingly said "No" to the registrar's well-known question of if he would marry the bride with his free will. The marriage officer got angry at İsmail Üstün's answer and left the scene, and said the groom "should make such jokes to others."

The groom and the bride were shocked at the incident. The bride, angry with her soon-to-be husband, said to him: "Well done." But, luckily, after a while, the registrar returned back to the registry office and united the couple.
Last Update: Nov 06, 2015 8:21 pm
RELATED TOPICS