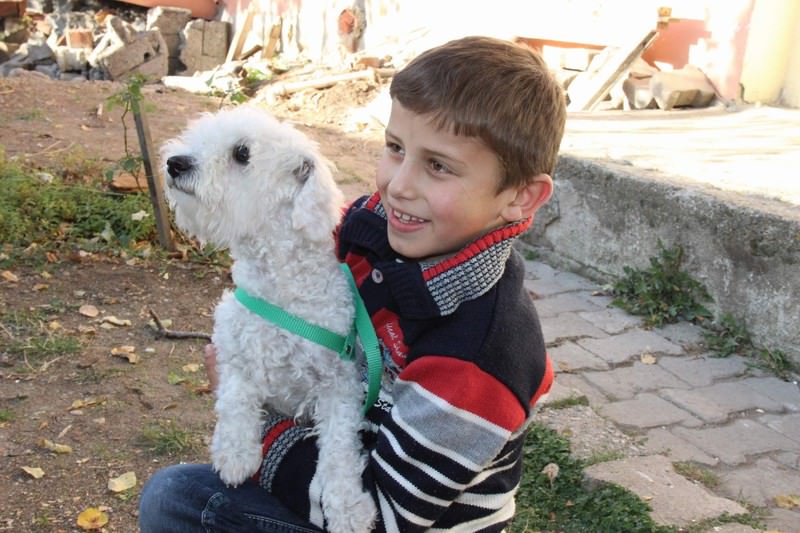 by daily sabah
Nov 07, 2015 12:00 am
President Recep Tayyip Erdoğan made animal-lover Ömer Faruk Yıldırım's wishes come true on Friday, after he gifted a dog to little Ömer who had carried the wounded dog in his neighborhood all the way to the hospital by himself.

Six months ago, little Ömer had seen his neighborhood dog with a wound on his neck and had carried him all the way to the state hospital in Yozgat. As it was a Sunday, only the accident & emergency department (A&E) was open. The doctors told the little boy that they could not give the dog treatment and he had to take the dog to a vet. The boy determinedly marchedout, carrying the injured dog and took him to the vet's. But as the vet's were closed too, he had to wait for another day.

Little Ömer said that he managed to take the dog to the vet the next day and the dog even stayed at his house as a guest for a couple of days.

Ömer and his family recently attended the Republican Day reception held at the Presidential Palace in the capital Ankara on October 29 as Ömer said he was grateful for the President's gift and kind invitation. "The president's invitation and hospitality showed me that the palace is really a home for the Turkish nation" said Ömer smiling from ear to ear, repeatedly thanking Erdoğan for the wonderful present.

Ömer said that he named his new dog 'Revan'(Life).

Little Ömer also made comments about the recent events around the world. He said that he was very upset that so much blood was shed in many places around the world. "In Palestine, Gaza, Iraq, Syria, Chechnya and Pakistan... Our brothers and sisters are being killed in these places; babies, children my age are being killed," he said showing that he is not only an excellent animal-lover but also very mature and conscious of the things going on around him.