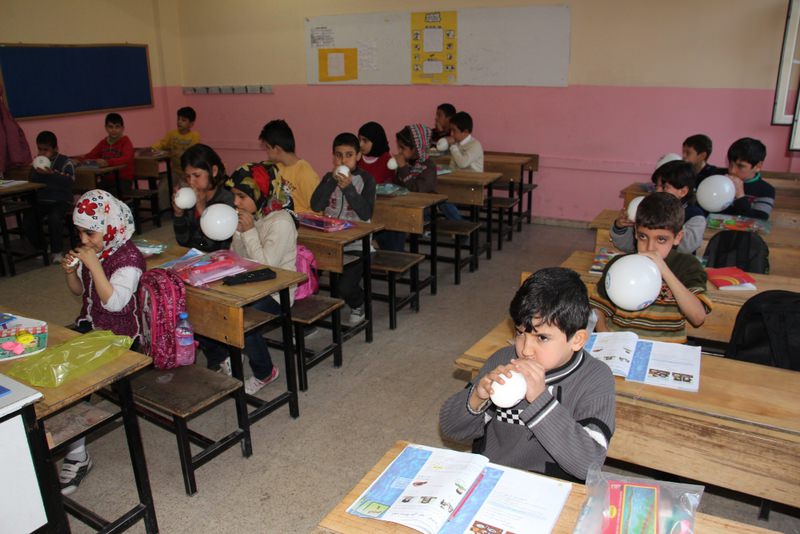 by Anadolu Agency
Nov 09, 2015 12:00 am
A Turkish labor union is helping Syrian students continue their education which has been disrupted by the brutal civil war in their home country. Turkey's Eğitim-Bir-Sen, a major education union, on Saturday released details of a program to provide 120 Syrian students with study aids in the eastern province of Siirt. Zekeriya Butur, deputy chairman of the union in Siirt, said they distributed stationary and other aid to dozens of students. "Syrians are oppressed and our brothers; we provided stationary aid to them to contribute to their education and so they do not feel alone," said Butur.

In his remarks, Butur pledged that the union would always side with the Syrians and support them. Mehmet Faruk Süzgün, coordinator of Siirt-based 14 Eylül Secondary School, said these students were also receiving education in accordance with their own language and curriculum. The school, which is a temporary education center for Syrian children, has 10 Syrian teachers. Hammud Almatar, school manager and Arabic teacher, expressed happiness that Syrian children, who fled civil war in their homeland, would continue their education in Turkey.

Praising the union for its assistance, Almatar said: "The union gave us books, notebooks, pencils and some other gifts for 120 students. We feel as if we are at our own homes, we are very thankful." One of the students Hamza Alhamad thanked the union, saying: "We do not feel ourselves alone here. They [the union] even gave us balloons and chocolate." Nearly 4 million Syrian people have become refugees and at least 7.6 million have been internally displaced due to the deadly conflict which has killed over 250,000 people since 2011, according to U.N. figures. According to the U.N., there are 2.18 million Syrian refugees registered in Turkey alone as of Nov. 1.