Turkey reaches out to Syrian children not attending school 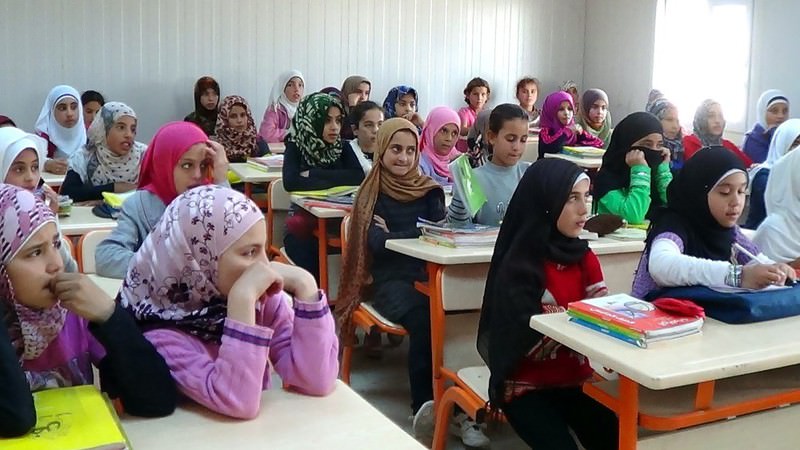 Syrian students at a school set up at a refugee camp near u015eanlu0131urfa. Most tent camps in the country house educational facilities.
by daily sabah
Nov 10, 2015 12:00 am

With concerns mounting over the plight of Syrian children in Turkey who had to drop out of school to flee the conflict in Syria, Turkey is planning to enroll about 400,000 children in schools across the country

Education is the key to a better future for Syrians who have suffered from the ongoing civil war in their country that forced them to take shelter in Turkey and other countries. Yet, according to a report by Human Rights Watch (HRW), some 400,000 Syrian children do not attend school in the country that is estimated to host more than 2 million displaced Syrians.

Officials from the Disaster and Emergency Management Authority (AFAD), the state-run agency that oversees aid efforts for Syrians, say they are looking to reach out to children not attending school. Officials said there were about 650,000 school-age children hailing from Syria in Turkey and more than 250,000 are enrolled at schools at refugee camps, public schools and "education centers" set up by nongovernmental organizations.

The HRW report says there are "practical obstacles" for enrolment at schools, namely, a language barrier for the education of Arabic-speaking children. Syrian students are offered courses in parallel with the Syrian curriculum and AFAD officials say te majority of teachers at schools for Syrian children are native speakers. For instance, 3,000 out of 3,300 teachers at refugee camps are native Arabic speakers, like the majority of teachers at private-run education centers.

To ensure a proper education for Syrian children, the National Education Ministry had implemented regulations last year for access to the public education system for all refugees registered by authorities. Public schools, understandably, have a shortage of teachers with knowledge of Arabic and the Syrian curriculum. To overcome this challenge, the ministry also introduced accreditation for education centers operated by charities and Syrian nongovernmental organizations and concentrated on an Arabic-language curriculum. More education centers are expected to be set up in the near future as Turkey copes with an influx of refugees from its southern neighbor.

Turkey is also opening temporary education centers for Syrians where they are taught Turkish and provided lifelong learning courses.

Turkey has spent $7.6 billion on refugees since the conflict in Syria displaced millions. HRW says the country spent $252 million on educating Syrian refugees in 2014-2015 alone and called on the international community to provide urgent financial and technical support for initiatives to provide refugees with greater access to education.

Authorities acknowledge that the growing number of Syrian refugees and the lack of a solution to the conflict in Syria is a heavier burden to the country than previously thought. Ankara is often critical of the international community for its failure to provide funds for humanitarian aid to refugees.

Stephanie Gee from Human Rights Watch said in a statement accompanying the HRW report that failing to provide Syrian children with education puts an entire generation at risk. "With no real hope for a better future, desperate Syrian refugees may end up putting their lives on the line to return to Syria or take dangerous journeys to Europe," she said.