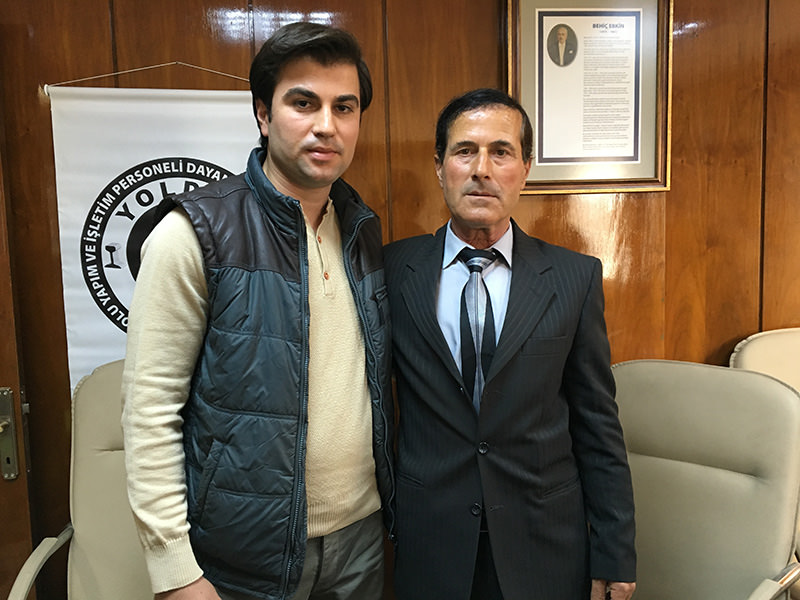 by Daily Sabah with IHA
Nov 10, 2015 12:00 am
İbrahim Çivici, a 59-year-old Turkish railway track inspector whose story went viral in social media, expressed his gratitude to the signatories of the campaign that will send him on his long desired vacation.

On October 27, an article published on Al Jazeera Türk featuring Çivici and his daily life. The difficulties of his work, along with his humble complaint that he hasn't been to a real vacation for the last 20 years, was heard by millions. A campaign was launched in online petition site Change.org to send Çivici to vacation and concluded with real success. Aiming for 75,000 signatories, the petition was signed by 85,933 people in just a week far surpassing expectations. Municipalities of Istanbul's historic Fatih and Aydın's Didim districts pledged to cover Çivici's vacation expenses, along with numerous offers from tourism companies to host him as their guests.

Speaking to Ihlas News Agency reporters in the local branch of a railway laborer association (YOLDER) in Izmir on Tuesday, Çivici said that he was both moved and surprised by the huge interest in his story.

"I would like to thank my people. I couldn't guess that they will show that much interest. We haven't been on a vacation for 20-25 years, that's correct. Problems with my wife and children, the debt of the house I bought. That's why I was going to my hometown, visiting my relatives and just start working again," Çivici said.

A railway track inspector for the Turkish State Railways (TCDD) for the last 20 years, Çivici continued by saying that there lots of offers for him, namely from Fatih and Didim municipalities and the Turkish Metal Union, to spend for his vacation, "There are many offers, and I have one month of annual leave. It is not possible to use them all. If we can find the opportunity to go for five days each, it would be nice. We will decide as a family."

Çivici said that there are offers for him to spend his vacation abroad, but he would prefer Turkey, saying, "I would like to see the [northern] Black Sea region. I once saw Antalya when helping a relative move his furniture, 17 years ago. Didim too, when helping a friend move."

The 59-year old added that his wife has not complained to him even once.

"People don't know how tiresome our work is. They usually perceive railroads as rail piles. But all of our measurements are within millimeters" he added.

Özden Polat, board chairman of YOLDER, stated that there are 59 other track inspectors like Çivici and they will send each on vacation with the help of Turkish Metal Union.
Last Update: Nov 10, 2015 5:24 pm