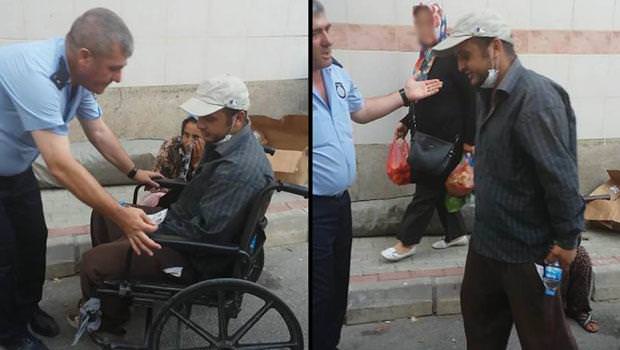 | DHA photo
by daily sabah
Nov 16, 2015 12:00 am
A person in a wheel-chair who was begging for money at a marketplace in the western province of Bursa's Gemlik district, wanted to leave the scene as he came across municipal police officers. But, onlookers were shocked to see him walking on his own two feet.

The municipal officers were at the marketplace of the district to take security measures against beggars, since begging is illegal in Turkey. They asked the beggar named Hakan Dol to distance himself from the market, but Dol who claimed to be paralyzed in both legs insisted on not leaving the market.

Upon Dol's insistence on staying, the police officers tried to move him, but this time, Dol stood up and tried to get away, seeming quite healthy.

Dol's actions were photographed by the police officers at the scene. He was subsequently taken to the police station where he was fined TL 208 ($72) for not leaving the marketplace although he was required to do so by law.