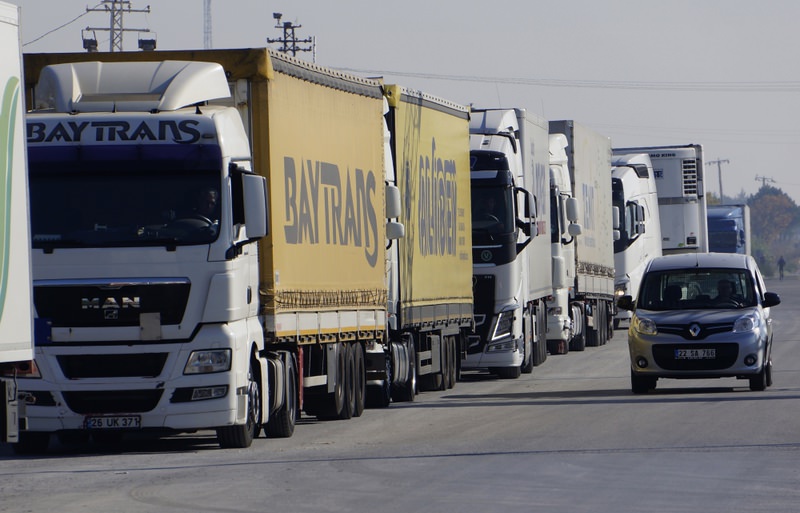 by Compiled from Wire Services
Nov 17, 2015 12:00 am
Bulgaria's decision to elevate security checks on the border following Friday's Paris attacks has left hundreds of truck drivers stranded on the Turkish-Bulgarian border. A long line of trucks, whose number was at least 200, were stuck on the Hamzabeyli border crossing.

A line of trucks reaching up to 10 kilometers was also witnessed at Kapıkule, another crossing on the border yesterday, one day after extra security measures were introduced.

Bulgaria has boosted security at busy crossings and authorities have ordered a thorough review of passports and vehicles crossing into the country following the Paris attacks.

At the Kapitan Andreevo crossing on the Bulgarian side, drivers waited impatiently for hours as officials conducted comprehensive checks on their cargo.

Bulgaria is regarded as one of the land routes for foreign fighters seeking to cross into Turkey from Europe to join DAESH in Syria and Iraq. Dozens of foreigners were detained at Kapitan Andreevo in recent months as they attempted to cross into Turkey. Detainees include a friend of two suspects responsible for the Charlie Hebdo attacks in France earlier this year.

The Bulgarian border is already a problematic crossing point for truck drivers as customs work is often slowed down either due to glitches at automated customs systems or a staff shortage as was the case last May after a major anti-corruption operation saw a significant number of customs officials detained, leaving the customs at the border substantially understaffed.