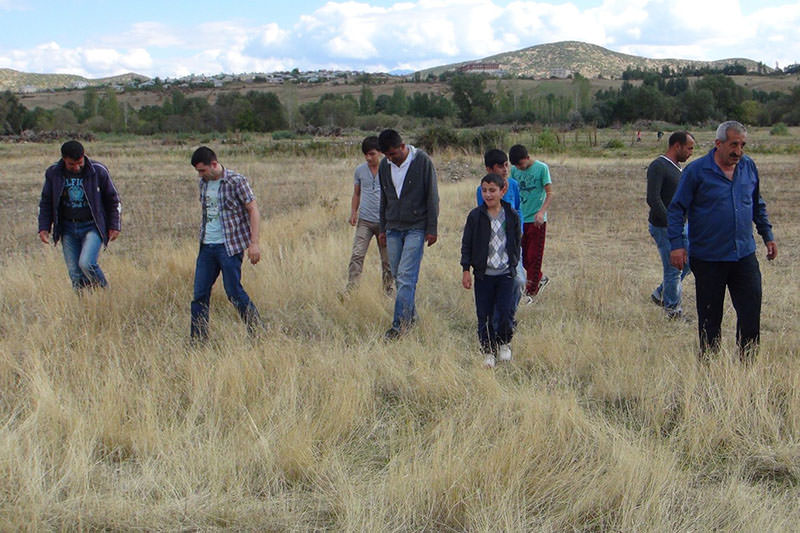 | u0130HA photo
by Daily Sabah with Wires Nov 17, 2015 12:00 am
It is a gold or rather meteorite rush in Sarıçiçek, a village in eastern Turkey. More than one month after pieces of asteroid Vesta hit an uninhabited area of the village in Bingöl province, locals say they earned more than TL 1 million ($346,765) from sales of the meteorite.

Sarıçiçek, a village with a population of 3,200, had recently made the headlines with villagers hunting pieces of asteroid upon hearing there were people willing to shed a considerable sum of money for them. What started as a paid hobby, meteorite hunting is now a lucrative sector for everyone involved as people from other cities travel to the village as well for precious pieces.

People of all ages now seek the remaining pieces of Vesta day and night, as even one gram is sometimes valued at $60. Meteorites are sought after both by collectors and scientists from across the globe. For this reason, it is not unusual to see almost everyone in the village keeping an eye on the ground even while doing something else. The meteorite is also the talk of the town, dominating conversations among villagers inquiring into rumors about how much is paid for any given piece or how the pieces are better to detect at night since they allegedly glow.

Vesta is expected to be a mainstay of conversations for longer with the fortunes it has brought to its finders. One local boasted that he bought a new car by selling pieces of the meteorite, while Hasan Beldek, 30, a villager working for tips at a car wash, is likely the luckiest of them all. Beldek found the largest piece weighing 1.4 kilograms, according to media reports. Speaking to Habertürk newspaper, Beldek said he was not interested in looking for meteorite pieces at first.

"Everyone was outside and I was sitting idly at home. My mother-in-law prodded me repeatedly and told me to look for the stones. I was fed up with her nagging so I went out and decided to give it a try. I walked for a few hours before I came across a black, shiny stone," he said. Beldek decided not to immediately sell the piece after he found out some buyers willing to pay more than $60 per gram. "This is a blessing from God. I learned that the stones are sold for as much as $200 per gram on some websites. I am now waiting for someone who wants to pay more. If I can sell it for a higher price, I will buy a house and a shop," he said.
RELATED TOPICS