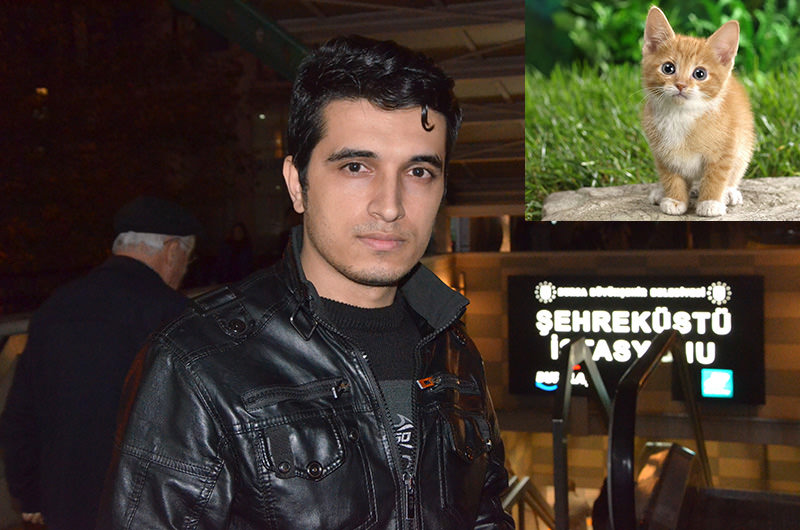 | AA photo
by Compiled from Wire Services
Nov 17, 2015 12:00 am
A man was hailed as a hero after he jumped on the railroad tracks to save a wandering kitten in northwestern Turkey on Tuesday. The kitten was casually walking on the tracks of a busy metro line in the city of Bursa and escaped from being crushed by an oncoming train when passengers at the station managed to warn the train engineer at the last minute.

When the kitten emerged again on the line, 26-year-old Metin Tepe decided to rescue it. Despite warnings, the passenger jumped on the tracks and grabbed the kitten, which had eluded past attempts to capture it, by grabbing it with his coat. Tepe managed to climb back onto the station platform while a train was fast approaching the station. In return, the kitten bit his finger and left the station after it was fed by passengers.

Tepe told Anadolu Agency (AA) he decided to rescue the kitten after he noticed its cries. "Everyone at the station was trying to reach it. I tried too but I couldn't. Passengers stopped an oncoming train and the kitten ran away. It disappeared for a while but my intuition kicked in and I decided to wait for its return. I saw it again but couldn't reach it," Tepe said.

"I waited for two hours and when it came close to the platform, I threw my coat on it. Then, I jumped and grabbed it. I knew it was dangerous but I simply couldn't leave it there," added Tepe, who received an applause from fellow passengers after the daring rescue.
Last Update: Nov 17, 2015 6:21 pm