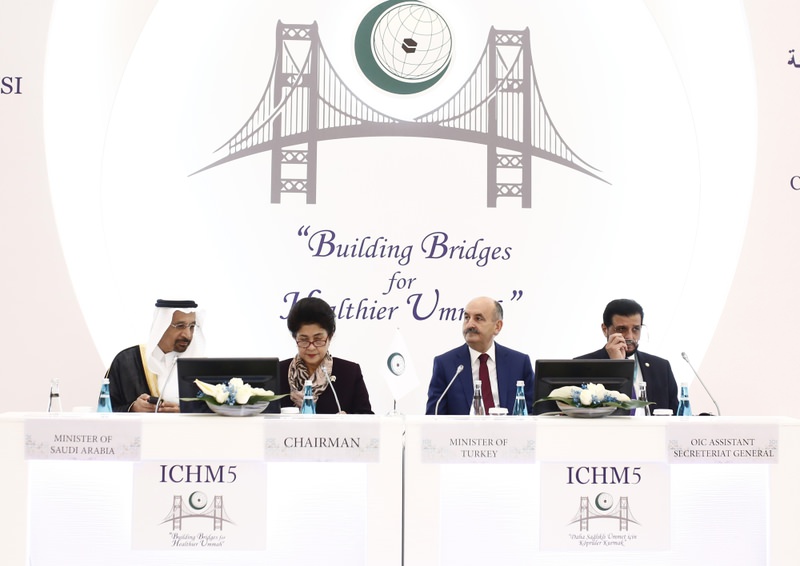 Health ministers from member states of the Organization of Islamic Cooperation met in Istanbul Tuesday for a summit where they will discuss health problems threatening the Islamic world, cooperation on health and improving the overall health of member nations

The fifth Islamic Conference of Health Ministers that brings together ministers from member states of the Organization of Islamic Cooperation (OIC) opened in Istanbul Tuesday. The conference will run from Nov. 17 and conclude tomorrow. With a theme of "Building Bridges for a Healthier Ummah (Islamic community)," the event aims to strengthen relations between 57 members of the international body on health issues and how to respond better to diseases, outbreaks, et cetera. Among the key issues to be discussed are the fight against cancer, emergency health cases, technology addiction and the contribution of nongovernmental organizations for the application of an action plan adopted by the OIC on health in 2013.

Along with delegations from Muslim countries, representatives of United Nations agencies and international organizations including the World Health Organization (WHO), the Polio Eradication Initiative and The Global Fund For Fighting HIV / AIDS are attending the conference.

The conference will also review the status of polio eradication efforts in OIC member countries, the progress of joint projects and efforts to tackle cancer in the OIC's African members.

Speaking at the opening of the event, Health Minister Mehmet Müezzinoğlu said 21 members of the OIC were the least developed countries and their status "reflected on social fields of developments such as health and education." "This pushes the Islamic community below the global standards in health and deprives people of modern health services," he said.

Müezzinoğlu pointed to the Sustainable Development Goals set by the United Nations that calls for ensuring healthy lives and promoting the well-being for all of all ages and said he hoped all member countries would work to achieve it. "It is a right for every individual as followers of Islam, since this is a religion that defines mankind as the most dignified of creatures," he said. "The OIC has contributed to forming global health policies and I thank the organization for every step taken to that extent. The OIC Strategic Health Programme of Action, approved in 2013, is among the most significant steps," he said. The action plan calls for joint action and cooperation on improving healthcare systems of member states, disease prevention and control, maternal, newborn and child health and nutrition, as well as medical technologies and emergency health response. Müezzinoğlu said Turkey has been active in the implementation of the plan and led coordination efforts in disease prevention and control.

The minister said although the action plan was comprehensive, achieving concrete results would not be possible with limited resources of coordinating countries. "We have to review the means of building resources and enhancing manpower for a better implementation of the action plan," he said.

"We have to decide on whether we should have a random agenda or we should set our own agenda on global health issues. I believe the Islamic world should play a leading role in defining the agenda on health. For its part, Turkey is ready to contribute to efforts to that extent," Müezzinoğlu said.

The health minister said a panel on preparedness and response in the emergency services will be held during the conference, which is especially significant for Turkey as the host of more than 2 million Syrians displaced by the conflict in Syria. "It is apparent that this humanitarian tragedy will not end any time soon and we can only heal the wounds partially if we act together. The Muslim world today has been synonymous with bloodshed and tears. But what is worse than the tragedy we are witnessing is not acting, remaining quiet and not helping brothers and sisters in need of aid," he said.