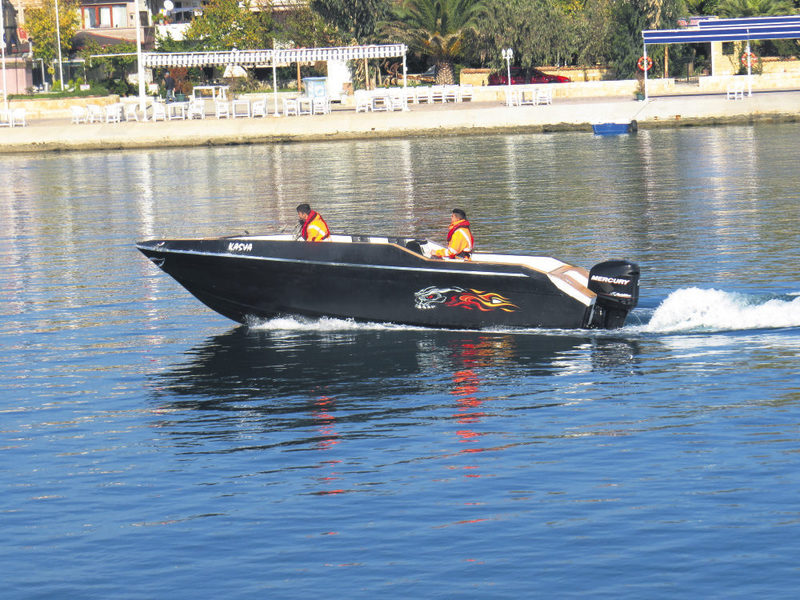 by Daily Sabah with AA Nov 24, 2015 12:00 am
Authorities nabbed a human smuggling ring on Monday after discovery that it was offering speedboat rides to Greek islands for wealthy migrants on the same route where poor migrants in rafts often drown.

Four Georgian and two Syrian suspects were detained in Marmaris, a popular vacation resort in the southwestern province of Muğla. They are accused of accommodating migrants in luxurious speedboats in groups of two or three to the Greek island of Simi, which lies a few kilometers away from the Turkish coast.

Police said the suspects were responsible for the "majority of illegal crossings from Marmaris to Greece" and used high-powered speedboats to avoid detection and capture by the Turkish Coast Guard.

One of the suspects was a Georgian woman who was as a French teacher. Police sources said the woman, fluent in English and French and a skilled driver, was transporting wealthy migrants, acting as tourists, to the coast in expensive cars to ward off suspicion from security forces.

The operation highlights the new trend in migrant smuggling of offering high-end services for easier access to the EU without detection. In June, two Syrian migrants were apprehended by the Coast Guard as they were attempting to cross to the Greek island of Kos from the Turkish town of Bodrum on the southwestern coast. According to Turkish media, migrants able to spend more money to get into Greece, the closest gateway to the EU from Turkey, are given rides in yachts and speedboats.

For those with less money, the Aegean Sea between Turkey and Greece is often a deadly route. A 4-year-old Syrian girl's body was found washed up on Turkey's western coast on Sunday in the latest fatality of Syrian migrants. Authorities believe the child, whose body was found wedged between rocks, and her family were on a boat that capsized on Nov. 18 off an Aegean island. According to the International Organization for Migration (IOM), the number of deaths in the Aegean Sea due to sinking migrant boats stands at 559 as of November.

Refugees often pay all they have to human smugglers to cross to Greek islands, which are close to Turkey's lengthy Aegean coast, but smugglers often defraud them or supply them with boats that are not seaworthy. Fake life vests filled with sponges that soak up water and are sold for cheap to refugees add to their troubles. Migrants still take the risk despite the deaths that have come before. Many migrants already risk death in overcrowded rafts that are unstable for even a short-distance sea voyage.

The Coast Guard stepped up measures and patrols in May after a surge in the number of refugees, but the number of refugees kept rising, especially after the rising DAESH threat in Syria and Iraq, two southern neighbors of Turkey. Turkey has more than 2 million Syrian refugees, but only a small number of them live in refugee camps across from the Syrian border while many others struggle to survive on the streets.

It was anticipated that the number of refugees would decrease with an onset of bad weather hindering attempts to cross to the Greek islands. Nevertheless, dozens of refugees are still intercepted daily on the Aegean Sea, resilient despite the spate of deaths on overcrowded boats.
RELATED TOPICS