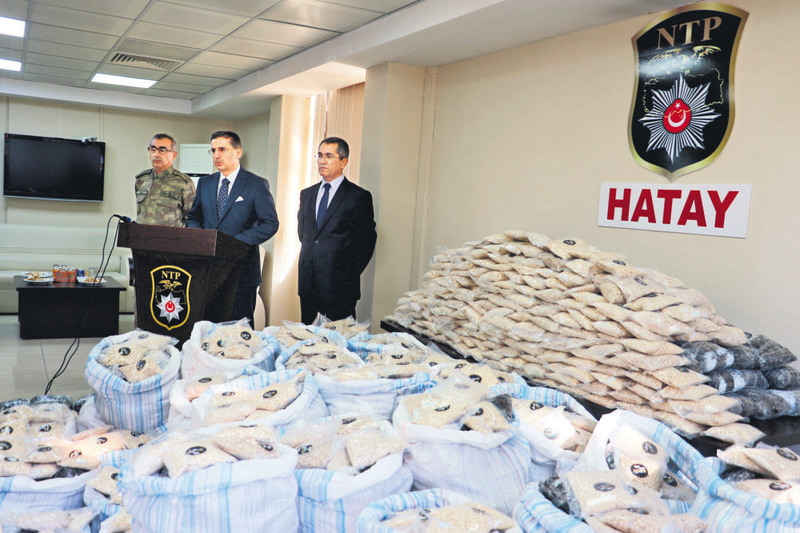 Officials showing millions of Captagon pills seized in the city of Hatay last week. The abuse of synthetic drugs is prevalent in Turkey although overall drug use is low.
by Daily Sabah with AA Nov 25, 2015 12:00 am

As Turkey steps ups its counter-narcotics efforts to curb drug abuse and trafficking, its action plan adopted last year got a boost from the World Health Organization, which recommended its implementation in other countries

An action plan adopted by the government last year to boost the country's efforts against drug abuse and smuggling sets a model for other countries, as the World Health Organization (WHO) advised its members to follow the plan, which was lauded for its success, according to Anadolu Agency (AA).

The government drafted the plan last year in cooperation with nongovernmental organizations to pursue a more effective policy against drugs abused by some 2.7 percent of the population.

The Rapid Action Plan Against Drugs covers all aspects of the struggle against narcotics, from raising awareness of their dangers and curbing demand to rehabilitation and treatment of addicts and facilitating social inclusion. It also paved the way for the establishment of "narcoteams," specialized police units active in neighborhoods where drug sales are concentrated.

WHO recommended the plan was to other countries, as drug abuse remains stable according to latest reports. A report by the United Nations Office on Drugs and Crime (UNODC) shows a total of 246 million people used an illicit drug in 2013, the latest year of UNODC statistics, and only one out of six problem users has access to treatment.

The action plan focuses on an awareness campaign and more effective law enforcement measures. As part of the awareness campaign, the government reached out to 10 million people, particularly students and their parents, about the dangers of drug abuse. A hotline was also set up for consultation to drug addicts and concerned parents, offering advice on how to detect drug addicts and how to help them. The hotline has seen high demand since it launched four months ago, with some 23,000 people having placed calls, almost half of them by those seeking treatment for their own addiction.

Turkey also increased the capacity of clinics for addicts as part of the plan. Nine new clinics have opened since last year and more clinics are planned for the near future.

As for the criminal aspect of drug abuse, the Turkish National Police established a new department for counter-narcotics efforts, which is tasked both with fighting drug dealing and helping addicts. The police will also set up liaison offices in 28 countries for counter-narcotics activities. In one year, police detained 66,000 suspects and seized more than 51 tons of drugs in operations. The latest was in the southern city of Hatay where nearly 11 million Captagon pills were seized in what is described as the largest Captagon haul in the country's history.

New security units were also deployed on the borders for efficient control of smuggled drugs. Police sources said there has been a considerable drop of up to 80 percent in drugs smuggled into Turkey by cargo and parcels sent to the country thanks to border controls, and more than 1.6 tons of drugs have been seized in border operations.

Narcoteams, which the police taskforce deployed around schools and in neighborhoods where drug abuse is high, are among the police's efforts to fight drug abuse, particularly among youth. The teams established last year rounded up more than 21,000 suspects and seized 24 tons of drugs including 13 million pills during their patrols and routine operations to stave off drug peddlers from "risky" areas such as schools.

Green Crescent (Yeşilay), Turkey's leading temperance movement, enlists the help of imams in the fight against dangerous addictions. A total of 90 imams from around the country have undergone training on substance abuse and alcohol, tobacco and technology addiction provided by Yeşilay, and more will be trained in the future.

Yeşilay Deputy Director Akif Seylan said they have already trained 28,000 teachers on how to spot addictions, help addicts and raise awareness among students. "Turkish citizens heed what [the imams] say and follow their advice. So, they will be instrumental in informing addicts and their families on what to do to quit their addictions," he said.

The training is part of an agreement between Yeşilay and the Presidency of Religious Affairs (DİB), which appoints imams and preachers to mosques across the country. DİB Vice President Hasan Kamil Yılmaz said their staff will be equipped with information, especially on how to prevent the addictions, and they will reach out to the general public both through mosques and Quran classes offered by the DİB.
RELATED TOPICS