Wet days ahead as heavy rain expected throughout Turkey 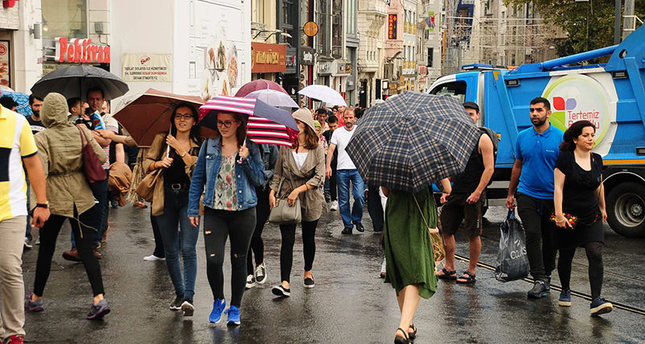 The weather forecast for Turkey changed dramatically on Thursday, after weeks of moderate temperatures, as rainfall made a comeback and the Directorate General of Meteorology warned of heavy rains and flooding in the western and northern regions this week. Rainfall gripped much of western Turkey on Thursday, including Istanbul, which has seen relatively warm weather throughout November with temperatures above the seasonal norm.

A new weather system that arrived on Thursday from the Mediterranean region will engulf the country, forecasters warn. Heavy precipitation was forecasted for the entire country on Friday and meteorologists expect a new weather pattern, accompanied by precipitation, will emerge on Saturday. Rainfall will mainly impact the western regions on Saturday, but will be felt all across the country on Sunday; with the exception of the western parts of the Marmara region in western Turkey.

Despite the heavy rains, the warm temperatures which have sustained their above-average seasonal warmth will prevail until next week. Turkey will start the upcoming week with a new weather system moving in from the Black Sea region that will bring a significant drop in temperatures accompanied by heavy rainfall.

Temperatures in Turkey's western cities, from Istanbul in the north to Muğla in the southwest, will vary between 15 C and 21 C on Friday. Istanbul will see temperatures up to 17 C on Saturday while İzmir will have a temperature of 17 C. The lowest temperatures in western Turkey on Saturday are expected to be between 11 C and 12 C in the cities of Uşak, Kütahya and Isparta.

Northern Turkey, usually referred to as the Black Sea region, will see temperatures hovering around 21 C on Friday. Temperatures will remain more or less the same for the eastern parts of the region on Saturday, though partly cloudy conditions will persist.

Temperatures on Friday and Saturday in the eastern cities will vary between 11 C and 17 C, with occasional rain in the cities of Diyarbakır, Şanlıurfa and Bingöl.

Share on Facebook Share on Twitter
Previous in Turkey The Turkish military on Wednesday released what it said was an audio... Next in Turkey A civilian pilot flying a Middle East Airlines (MEA) flight from Beirut's...
DAILY SABAH RECOMMENDS