30 percent of deaths in Aegean Sea have been children in 2015: UNICEF 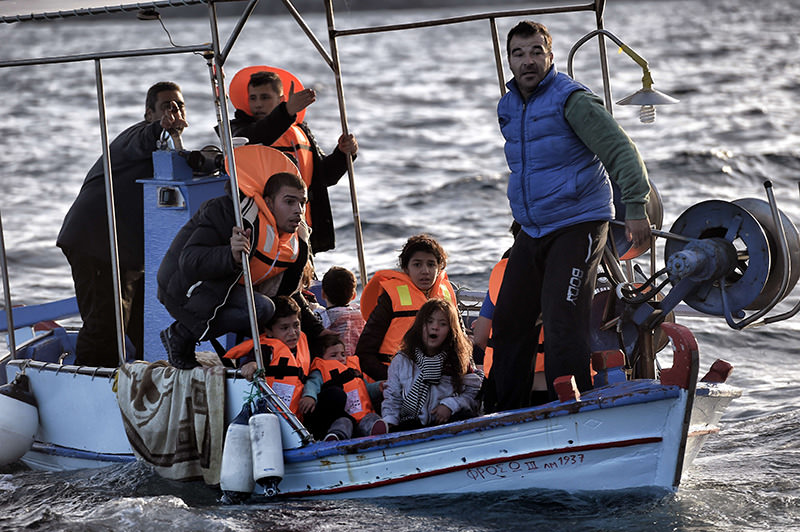 Greek fishermen rescuing Syrian refugees as the boat they boarded sank off Greek island of Lesbos after crossing Aegean sea from Turkey on Oct 30, 2015 (AFP photo).
by Anadolu Agency
Dec 02, 2015 12:00 am
Some 185 refugee children have died in the Aegean Sea between Turkey and Greece in 2015 so far UNICEF has said.

"In the Aegean (Eastern Med), about 30 percent of the deaths this year have been of children. This is currently 185 children out of a total of 590 deaths in the Eastern Med this year," UNICEF spokesperson Sarah Crowe told Anadolu Agency on Tuesday.

However, since then at least 90 refugee children have died in the Aegean Sea in October alone.

One in five of these victims were aged two years old or less. Overall, UNICEF says five percent of the fatalities in the Eastern Mediterranean were under the age of two.

Most of the refugee children who have died this year are from Syria, Afghanistan and Iraq, and were under the age of 12, according to UNICEF.

According to UNICEF statistics, 30 percent of the 3,500 deaths in Mediterranean Sea this year were children, meaning more than 1,000 youngsters died in perilous sea voyages in 2015 so far.

However, the charity is reluctant to give definitive data on the tragedies.

"We not have a total figure of children deaths for the whole Mediterranean because data on age of those who die are poor in the Central Mediterranean," Crowe said.

"We don't know what share of those who died are children though. It is likely a lower share than in the Eastern Med as fewer children travel through the Central Med," Crowe added.

According to UNICEF, since the beginning of this year, more than one in five of the over 870,000 refugees and migrants crossing the Mediterranean are children.

A quarter of all these child applicants originate from Syria, followed by Afghan children on 18 percent.

According to the International Organization for Migration, the total number of people crossing the Mediterranean Sea in 2015 has reached 878,000, which is four times higher than last year.