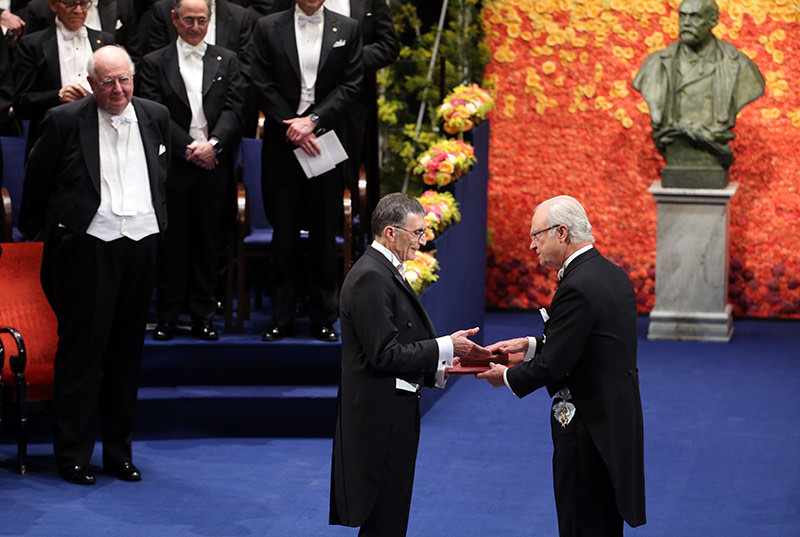 Turkish professor Aziz Sancar was crowned his scientific achievements with a Nobel Prize on Thursday which was awarded to him, Swedish scientist Tomas Lindahl and American scientist Paul Modrich by Swedish King Carl XVI Gustaf for their studies on the repair of damaged DNA by cells in the body.

"Their work made a decisive contribution to the understanding of how the living cell functions and provided knowledge about the molecular causes of several hereditary diseases and mechanism behind both cancer development and ageing," the Nobel jury said.

DNA is the chemical code that makes and sustains life. Cells divide, or replicate, billions of times throughout one's lifetime. Molecular machines seek to copy the code perfectly, but random slipups in their work can cause cells to die or malfunction. DNA can also be damaged by strong sunlight and other environmental factors. But there is a swarm of proteins, a type of molecular repair kit, designed to monitor the process. These proteins proofread the code and repair damage. The three scientists were lauded for mapping these processes, starting with Lindahl, who identified so-called repair enzymes, the basics in the toolbox. Sancar discovered the mechanisms used by cells to fix damage by ultraviolet radiation and Modrich laid bare a complex DNA-mending process called mismatch repair.

"The basic research carried out by the 2015 Nobel laureates in chemistry has not only deepened our knowledge of how we function, but could also lead to the development of lifesaving treatments," the Nobel committee said. Sancar and others had also discovered how cisplatin, a common cancer drug, and similar drugs damage the DNA of cancer cells, contributing to future research on better targeting and killing of cancer cells. He summed up his mapping efforts in his statement to the media, saying that they are now able to tell how any spot on the genome, with its 6 billion base pairs, can be repaired.

Addressing a conference at Stockholm University three days ago, Sancar said that scientific studies would allow an understanding of cancer as a mechanism within the next decade and that current cancer drugs had destroyed DNA repair bases before cancer cells and they were working to prevent this situation. Referring to his Circadian clock or Rhythmic Clock study that determines the hours when DNA repair occurs, Sancar said that the clock is key to finding the time when repair is at a minimum and to supply drugs to cancer cells at that time. "This will both boost the effects of the drugs and lower their side effects," he said at the conference.

Sancar, 69, is one of eight children of an impoverished family from a small southeastern Turkish town. He became the pride of Turkey when he was announced as a winner of the Nobel Prize in chemistry, the sum of which is 8 million Swedish kronor ($950,000). Sancar studied medicine and worked as a doctor in his hometown for two years before moving to the United States to pursue further studies, which took him to the University of Texas and finally to the University of North Carolina where he currently serves as the Sarah Graham Kenan Professor of Biochemistry and Biophysics.

Sancar's achievements as a recipient of the Nobel Prize is a source of pride for Turkey, which is home to many prominent scientists who have moved abroad in a brain drain in the past, due to limited opportunities to pursue advanced studies in Turkey. Surprised by the overwhelming attention he received after the announcement of the prize, Sancar was quoted by the Turkish media as saying: "I would have won this award 20 years ago if I knew that the Turkish people were delighted so much. I hope this will set an example for the Turkish youth."
Last Update: Dec 10, 2015 6:31 pm
RELATED TOPICS