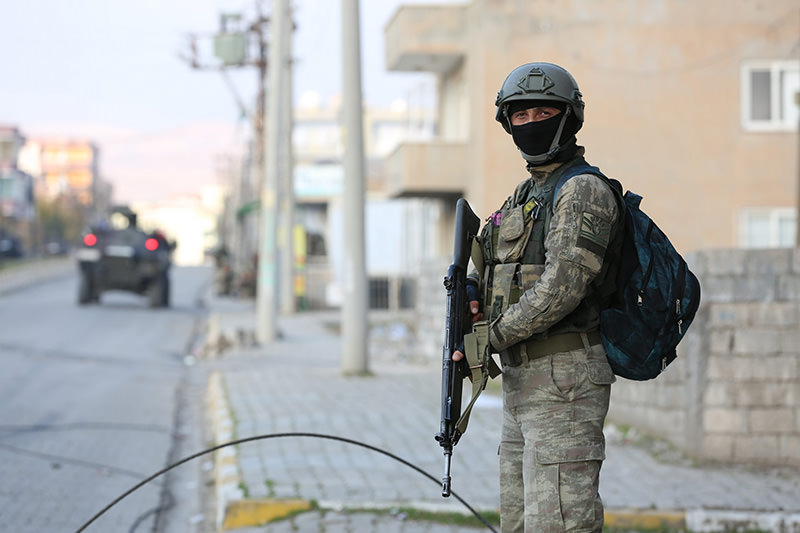 |AA Photo
by Anadolu Agency Dec 19, 2015 12:00 am
The security operations launched Tuesday against the terrorist PKK organization in southeastern Turkey will continue "until public security is established", the Turkish military said Saturday, while noting that the operations have eliminated a total of 110 PKK terrorists in the past four days.

"The priority of the operations carried out in towns of Cizre and Silopi is to ensure the safety of both our security forces and the civilians," according to a statement issued to Anadolu Agency by the Turkish General Staff.

"The operations carried out by the Turkish Armed Forces, gendarmerie and police will continue in the region in a steadfast manner until public security is established," the statement said.

A joint security operation including the Turkish police, gendarmerie and military was launched Tuesday in Şırnak province "to neutralize the members of the separatist terrorist organization, nesting in residential areas", "to establish public order and security," and "to enable civilians to resume normal living conditions".

A total of 110 PKK terrorists have been killed in ongoing anti-terror operations in Turkey's southeastern provinces over the last four days, local security sources said Saturday.

The sources, speaking on condition of anonymity, told Anadolu Agency that 78 of the deaths occurred in the Cizre district of Şırnak province amid an ongoing 8-day curfew.

Security forces killed six terrorists in Silopi district, as another 16 were killed in the central Sur district of Diyarbakır and 10 in the Dargeçit district of Mardin province.

In the operations in Şırnak and Diyarbakır two soldiers were killed, the sources said, and 23 others, including police officers, were wounded in both provinces.

Two senior officials from YDG-H, the youth wing of the terrorist group PKK, were also killed during the operations in Cizre.

Meanwhile, an autopsy report revealed Saturday that a 30-year-old woman, who was killed Wednesday in the southeastern town of Cizre in the Şırnak province, was shot by PKK terrorists.

Hediye Şen was hit by eight bullets in her backyard amid an ongoing security operation in the Sur neighborhood -- not to be confused with the district in Diyarbakır. The estimated trajectory of the bullets revealed that she was shot by the terrorists, the report said.

A curfew was imposed on Cizre and Silopi on Monday. Many citizens reportedly left the district before the curfew.

The PKK -- considered a terrorist organization also by the U.S. and the EU -- resumed its armed campaign in late July. Since then, more than 200 members of the security forces have been martyred and over 1,700 PKK terrorists killed in operations across Turkey and northern Iraq, including airstrikes.