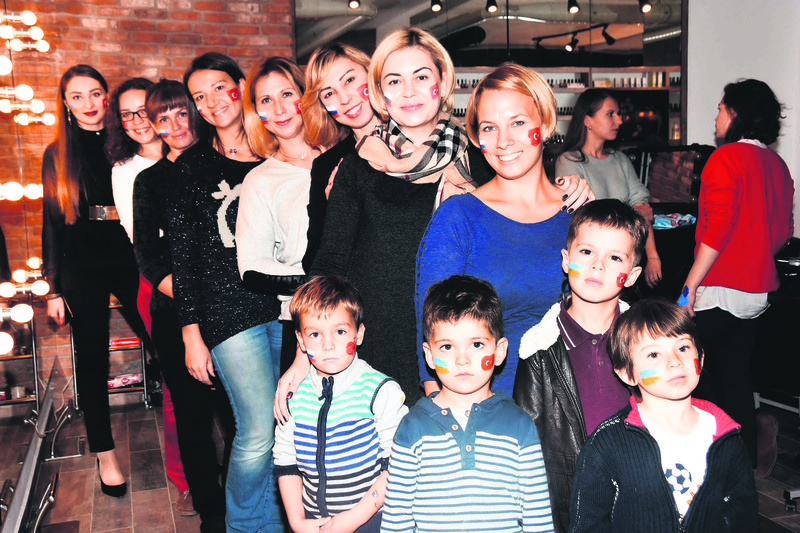 by Anadolu Agency Dec 20, 2015 12:00 am
Russian expats living in Turkey have told Anadolu Agency they are anxious about the recent tension between their homeland and Turkey.

Many are worried that the current sour relations-sparked by last month's downing of a Russian warplane which violated Turkish airspace-will turn into a long-term crisis.

Speaking to Anadolu Agency, several Russian people who have married and put down roots in Turkey, reflected on how they have been affected.

"I was shocked when I heard the news [of deteriorating relations], for the first time because we did not expect such consequences," says Evgenia Lyalina Yayıkoğlu, an Istanbul resident for the last eight years.

Thirty-three-year-old Evgenia, a painting teacher, is only one of around 250,000 Russian people thought to be living in Turkey.

Evgenia is married to a Turkish man, just like around 80 percent of Russians living here, according to the Istanbul-based Russian Education, Culture and Cooperation Association.

"We naturally fear the upcoming consequences. I had a daughter and you do not know if there is a future for her here.

"I really do not want to hear anything bad anymore because we fear the negative effect on our future," Yayıkoğlu says.

The tensions between Ankara and Moscow flared following Turkish F16s' downing of a Russian SU-24 aircraft near the Turkish-Syrian border last month.

Following the incident, Russia imposed a range of unilateral sanctions on Turkey, including a ban on food imports, an end to visa-free travel and calls for tourists not to visit Turkey.

"We worry about leaders drawing a long bow, but [Turkish President Recep Tayyip] Erdoğan's remarks defending the rights of all citizens living in this country set our minds at ease."

Indeed, whereas Turkish citizens in Russia have been warned about their safety, Russian people who have made their home here, despite being anxious, have not faced the same low-level hostility.

A statement issued by the Turkish embassy in Moscow said it has been receiving a number of calls from Turkish citizens in various parts of Russia, complaining of harassment by the local authorities.

At least 26 Turkish businessmen, planning to attend an agriculture event in Russia, were taken into police custody in the Black Sea city of Krasnodar two days after the downing of the warplane on Nov. 24.

However, unlike in Russia, according to expats, they have not faced negativity in Turkey so far, only support.

Evgenia Bilge, 30, a freelance editor and mother to a two-year-old girl, was planning to go home to mark New Year, together with her Turkish husband.

"When Russia announced that they would suspend the visa-free agreement, we had to cancel our plan," the 10-year Istanbul resident says.

"In addition, we do not know what will happen [between the two countries] the next day. If we went to Russia, there is a possibility of not being able to return, so it is better to stay here right now," she adds.

Deteriorating relations and sanctions do not only affect short-term plans like New Year celebrations, but also long-term commitments.

"We've started following recent developments much more carefully now as we believe they will directly affect us. For example, if a war erupts, where will we go?

"It is sad but we've even spoken of this possibility with my husband," Bilge adds.

Thirty-six-year-old Nadezhda Dokgozoglu, a Russian and English-language teacher in western Izmir says: "I have not faced any bad behavior from Turks so far and neither do I expect such a thing," adding:

"The ties between both nations are not so easily affected by political incidents."

"[Turks] around me generally say: "We are friends, forget about the policy," Yayıkoğlu says.

Bilge has had similar positive responses: "Some say: You are like half-Turkish. Never mind about all of this.' Turks around me support me, generally."

However, as expats' families are back in Russia, they are torn between two countries.

Dokgozoglu, who has been married to a Turkish man for seven years, says: "What I worry about are my relatives in Ural [a federal district in central Russia].

"My mother and sister are there. I do not know how to go there with my husband or if I will face any problems or not. This makes me very sad."

Despite the recent turbulence, Russian expats-recalling the historic ties between the two countries-are hopeful things will improve:

"We are thinking of nothing but friendship, peace and brotherhood between the two countries," Rizayeva says.

"All of our hopes are for good relations now, nothing else," Dokgozoglu adds.