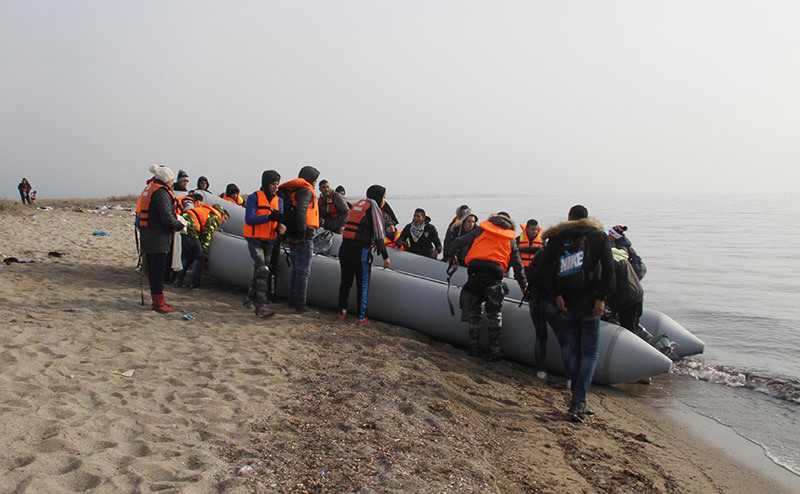 20 people drowned off Turkey’s Aegean coast when a wooden boat carrying refugees sank early on Thursday, according to the Coast Guard

The Coast Guard said 20 refugees, including 11 children and one pregnant woman, drowned when their wooden boat sank off the area of Bademler in the western province of İzmir's Dikili district in the early hours of Thursday.

Coast Guard teams launched search and rescue efforts for the boat packed with refugees of unspecified nationalities that capsized as it tried to reach the Greek islands. 21 others were rescued, while dead bodies were recovered in the sea, officials said. The refugees told the officials that there were 41 people on board of the vessel.

The search would continue for the time being, the officials added.

Backed by two Coast Guard boats and two helicopters, the search team found the dead bodies. Dive teams were dispatched to the scene after survivors spoke of other refugees in the closed cabin of the semi-submerged vessel. Just hours earlier, the Coast Guard had rescued the Syrian refugees stranded at sea when the engine of their rubber boat broke down.

Turkey's four Aegean provinces of Çanakkale, İzmir, Muğla and Aydın, which face the Greek islands, are prime spots for refugees leaving Turkey for EU countries. Over the past year, thousands have made the short but perilous journey across the Aegean Sea in a bid to reach Northern and Western Europe. Worsening weather conditions in winter makes the trip even more dangerous.

According to the latest data from the International Organization for Migration (IOM), more than 801,000 refugees reached Europe via the Aegean Sea to Greece from Turkey, accounting for 80 percent of the refugees arriving illegally in Europe by sea in 2015. The IOM's death toll of refugees dying en route to Europe on the Aegean Sea was 706 as of Dec. 18, excluding the latest casualties. On Tuesday, 11 migrants, including three children, drowned when a boat carrying 18 capsized off Kuşadası, a town in Aydın, as they were heading to the Greek island of Samos.

According to the U.N. refugee agency, more than 950,000 people have reached Europe by sea this year. Europe faces the largest refugee influx in its recent history due to aggravated conflict in Syria, deteriorating security in Iraq and Afghanistan and other challenges in Asian countries, which have forced millions to leave their homes.

Turkey is home to more than 2.4 million Syrians. Though many prefer to stay in the country, either in refugee camps near the country's border with Syria or in houses they bought or rented across the country, a significant number of Syrians also seek shelter in Europe. With strict controls on Turkey's land borders with Greece and Bulgaria, sea is the only viable route for migrants as the coast lies only a few miles away from the Greek islands that dot the Aegean Sea. Syrians, along with Iraqis, Afghans and refugees from other countries, depart from secluded spots on the long coast stretching for more than 2,000 kilometers, from Çanakkale in the north to Muğla in the south. Their journeys are often cut short either due to malfunctioning boats or overcrowding that leads to the sinking of their dinghies. Weather, worsened by the onset of winter, also contributes to the heightened death toll in the dangerous waters of the Aegean.

According to numbers reported by the media, 88,897 migrants were intercepted by the Coast Guard this year, a 650 percent rise compared to 2014. The majority of "illegal passages" to the Greek islands are by rubber boats, as they are cheaper and easier to obtain than wooden boats. Refugees are guided by human smugglers on their journeys and pay substantial sums to smugglers for the crossings. Turkish authorities nabbed 181 smugglers this year, though it is estimated that a higher number of smugglers evaded authorities as they often flee once they accompany the refugees to departure points.
Last Update: Dec 24, 2015 4:21 pm
RELATED TOPICS