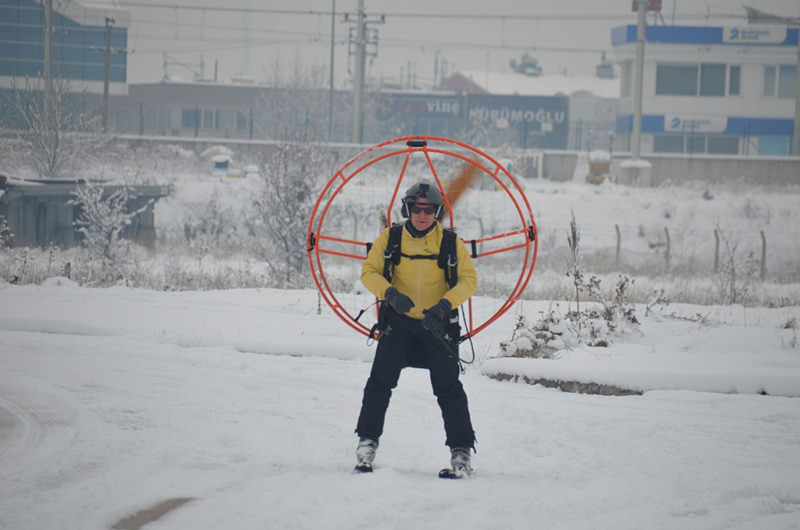 44-year-old u0130brahim Dinu00e7er skiing with a paramotor attached to his skis. (DHA Photo)
by daily sabah Jan 02, 2016 12:00 am
As the cold spell continues to rule over Turkey, a 44-year-old Turkish man's innovative skiing invention has taken social media by storm.

İbrahim Dinçer, who owns a flight school in Nilüfer district in Bursa province, decided to incorporate a paramotor he uses for powered paragliding into another activity he loves: skiing.

This interesting combination has caught the attention of many around Turkey.

He said that his decision to combine his skis with a paramotor wasn't much of a well-thought-out plan but came out of pure boredom. "I thought it would be interesting to ski with a paramotor," said Dinçer.

Dinçer said that he and his 14-year-old son Kerem worked on his new-and-improved skis and made a few trial runs in the streets of their neighborhood. "We liked how it went, it was good" Dinçer said.

He also stated that he started to build his own paramotor engines after he had trouble procuring spare parts for the paramotor he bought in 2009.

Underlining that he is the first person to start the mass production of paramotors in Turkey, Dinçer said that he will start to produce ski motors which will be called 'motoskis.' "After trial-and-error we saw that a paramotor was too powerful to be used for skiing. We will produce motors half the power for the new ski motors," he added.

Bursa is home to Uludağ, a mountain popular for winter sports, and some of Turkey's biggest ski resorts.