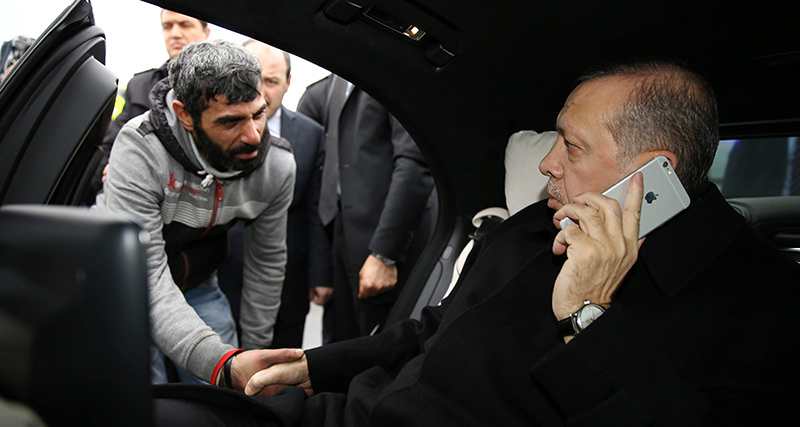 by daily sabah Jan 04, 2016 12:00 am
The man who was stopped by President Recep Tayyip Erdoğan as he attempted to commit suicide by jumping off the Bosporus Bridge has reportedly started working at a public institution in Istanbul.

According to reports, Vezir Çatraş, the 30-year-old unemployed man was told by President Erdoğan that he would be given assistance, as he had a conversation with the President, right after his guards stopped him from committing suicide. However, the exact position of his new job has not been specified.

Çatraş had reportedly attempted to commit suicide for 'family-related and unemployment issues' on December 25.

President Erdoğan's motorcade was crossing the Bosporus Bridge after he performed Friday prayers at a mosque on the Asian side before heading to the presidential office on the European side. At that moment, the motorcade came to a halt when the president and others noticed a commotion by the rails and saw the police attempting to stop a man from leaping off the bridge into the cold waters of the Bosporus.

The officers providing security for President Erdoğan and aides rushed to check upon the man as the president told them to summon him to his car. The man apparently surprised to see the president in person, obeyed and approached the car. Kissing the president's hand in a traditional Turkish sign of respect, the man conversed a while with the president who convinced him not to attempt to take his own life again. Erdoğan then made a few phone calls in the presence of the man, apparently ordering authorities to help Çatraş with his problems.