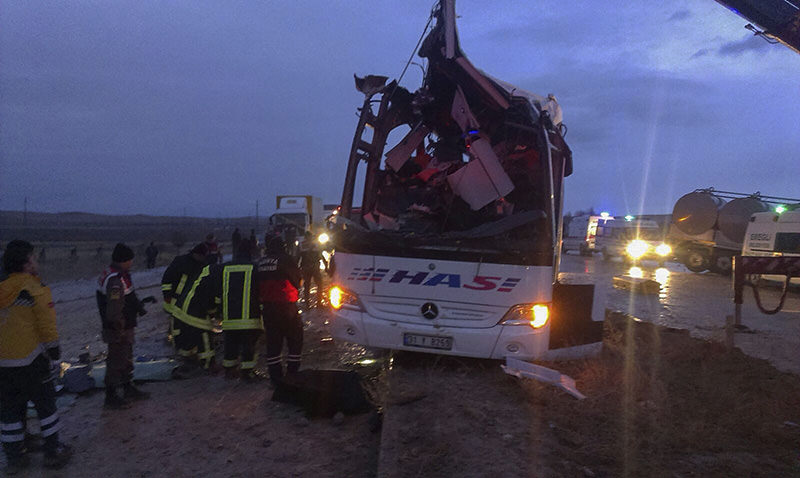 |AA Photo
by Daily Sabah with AA Jan 05, 2016 12:00 am
The death toll from two deadly traffic accidents in central Turkey has risen to seven, local sources said on Tuesday.

At least five people were killed and 25 others injured when a passenger bus crashed into another overturned vehicle on an icy highway in central Konya early Tuesday morning, according to initial reports.

One of the buses was traveling from the central town of Ereğli to the southern Adana province when the driver lost control at the 15-kilometer mark on the two-lane Ereğli-Adana Highway.

The bus then crashed into a traffic island, ploughed into the other lane and turned over, before being hit by another bus traveling in the opposite direction.

The injured have been taken to hospital.

In another nearby accident, a truck also lost control and overturned. No casualties were reported in that accident.

Separately, a driver was seriously wounded and later died at the hospital after he lost control of his van on an icy road in Konya's central district of Meram on Tuesday.

On Monday, eight people were killed and 26 others were injured in a bus accident triggered by heavy snow near the town of Kaman in central Kırşehir.

Snowfall across Turkey and temperatures dropping below zero continue to affect daily life one week after a new weather system hailing from the Black Sea wreaked havoc on the western parts of the country. Snowstorms have clogged roads, especially in remote villages, while main roads connecting cities in western and northern Turkey have seen a slowdown in traffic due to precipitation.

Snowfall is expected to become less intense this week, according to the weather forecast. Meteorologists say it will be replaced with rainfall, which will continue until the weekend in all cities with a few exceptions in the western cities on the Aegean coast.
Last Update: Jan 05, 2016 12:51 pm
RELATED TOPICS