Government report: State grants to HDP may have funded terrorism 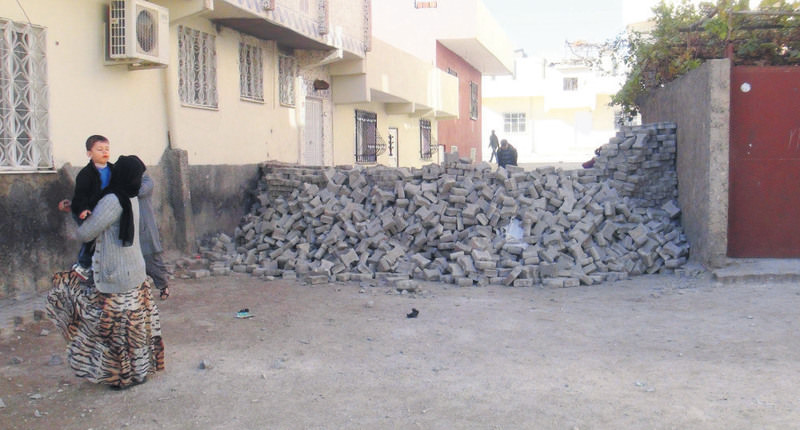 A barricade made of paving stones in the town of Nusaybin in the province of Mardin. Municipalities are accused of sending bulldozers to help terrorists set up barricades to prevent the advance of security forces to wipe out the militants.
by Uğur Yıldırım Jan 07, 2016 12:00 am

A report from the Prime Ministry questions how municipalities run by pro-PKK Democratic Regions Party (DBP) in the southeast spend or do not spend state funds, and raise concerns that the money might be used to finance militants of the terrorist organization behind the violent campaign targeting soldiers, police and civilians

Terrorism has plagued southeastern and eastern Turkey since last summer with hundreds of soldiers, police officers and civilians being killed in a brutal campaign of terror by the PKK. Many wonder how the terrorist organization made a strong comeback after a lull in their activities a few years ago and how much support it draws from the local communities in its street clashes.

One of the culprits behind the terrorists' omnipresence in the region and their relative success in terrorizing the population may be a familiar associate of the PKK: The Peoples' Democratic Party (HDP), a staunch defender of the group claiming to fight for Kurdish rights. The HDP's sister party Democratic Regions Party (DBP) rules the majority of municipalities in the cities and towns in southeastern and eastern Turkey. A new report by the Prime Ministry's office questions how those municipalities spend state funds sent by Ankara and points out the funds may have been funneled to the PKK or at least in supporting its propaganda in the region.

The report highlights a bloated rate of personnel the municipalities employ despite little investment in public services and raises suspicions of links between the municipality personnel and the PKK.

It is suspected that municipalities divert the funds to the personnel either directly linked to the PKK or working for groups close to the terrorist organization.

DBP municipalities are already under fire for helping the terrorists instead of cooperating with security forces. It was revealed that bulldozers and other equipment belonging to some municipalities were used by municipality personnel for infamous ditches common on the streets of terror-stricken towns used to block the roads by the PKK. Municipalities are also criticized for not deploying firefighting teams to areas hit by the PKK attacks.

As Davutoğlu pointed out in his remarks yesterday, the municipalities also openly help building "taziye" (condolence) houses that are used as warehouses by the terrorist organization instead of its original purpose of hosting funeral ceremonies.

The Prime Ministry's report apparently aims to counter the propaganda by the HDP, claiming the state does not supply funds to municipalities run by the opposition parties.

The municipality of Mardin, for instance, has a budget almost entirely supported by the state. In 2014, Mardin received TL 137 million ($45 million) and spent only TL 4 million for investments in public services while some TL 39.5 million was spent on personnel. The fate of the TL 19.5 million is not known while TL 74 million remain in the coffers of the municipality. Locals complain of problems in the water grid and poor road conditions where most roads do not even have asphalt coating.

In Diyarbakır, where the fiercest clashes between the PKK and security forces occurred and a hotspot of terror attacks, the state funded the municipality with TL 326 million but the municipality spent only TL 65 million on investments while allocating TL 81 million to personnel.

The prime minister said yesterday the HDP's call for autonomy in the southeast, where a large Kurdish population lives, is contradictary. "You cannot say the autonomy will help the development of the region while you spend the money given to you not on investment but for other things," he said.
Last Update: Jan 07, 2016 11:44 am
RELATED TOPICS